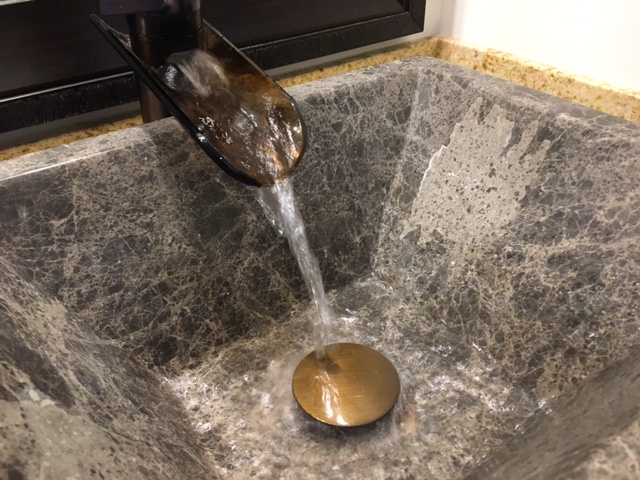 Decorating with buckets makes a festive and bold statement. Nothing says, “Wow! These homeowners are prepared for anything!” like a few buckets stashed under the sinks or placed under the ceiling. I learned this art as a young child. The house where I grew up in Ohio was a Frank Lloyd Wright style home that had flat roofs for catching all of the ice and snow. In the winter, the entire roof structure would weaken, so in the spring, when the rains came, magical waterfalls would just suddenly appear. My parents spent the first few years in that house being quite irate. Then, they just grabbed a bucket and a few beers to watch Nature’s mysteries pass through the hole in the ceiling. When the rain left, we could take the bucket away. We soon realized we had created our own celebration called, “Bucket Day”—as in: “Hey! It’s Bucket Day again! Get the bucket!” Imagine Nate’s horror when he married me and realized my attitude toward leaks was so nonchalant! The minute a leak would appear, Nate would fix it. I didn’t understand why he was in such a rush:

Nate would promptly ignore me and grab a variety of tools, which kept him great company for many hours while he fixed leaks in the various houses we’ve inhabited during our 18 years of marriage. Now that we’ve moved into a new house, we’ve discovered a new leak, which is under my bathroom sink. Sure, we have a bucket to catch the water, but it’s important to fix the leak and I’m determined to help this time.

Now, I know what you’re thinking: “If she really loves buckets that much, then why would she need to fix the leak? The bucket solves the problem!” The bucket does not solve the problem. In fact, leaks cause many problems. When I ran a key word search for “injuries” and “accidents” from leaky faucets, I found thousands of injury lawyer sites warning against slippery surfaces. In 2011, the CDC published research from 2008 that investigated “Nonfatal Bathroom Injuries Among Person’s Aged ≥ 15 Years.” According to the report, 21.8 million persons racked up $67.3 billion in medical costs. Most of the injuries resulted from slipping in or around the tub. Since our leak is in the bathroom, any extra water on the tile makes for a slippery surface and I just don’t need to add any spills to my daily routine. I also found medical advice concerning women’s bladder leaks. I’m not sure how the two are related, but I don’t want to wait one minute longer to find out. I’m fixing that leak!

In addition to avoiding injury from slips and falls, fixing a leak can add value to the home. It prevents further rot and damage from occurring and it can potentially save money on the water bill. In fact, the Saving Water Partnership for Seattle and Participating Water Utilities states that one way to find a leak is to watch the water bill. If it’s unusually high, there may be a leak in the house. We already know we have a leak and we know it’s coming from my bathroom sink, but we’ll need to take the sink apart in order to find out what’s wrong. We suspect there’s either a crack somewhere in the faucet that could be patched with plumber’s tape. Or, perhaps one of the nuts that attaches the wires and tubes of the faucet is loose.

Nate’s ready to get started, but I want to know about safety. Will I get hurt repairing this leak? I probably could. Plumber magazine, in a 2017 article by Mitchell Proner, warns professional plumbers about the hazards of chemicals, cuts, and burns. Fortunately, I won’t be dealing with anything that could potentially burn or cut me, but I could face other dangers the magazine mentions like musculoskeletal injuries from bending, lifting, and crawling into tight spaces. Fortunately, Popular Mechanics offers a 2017 article by Michael Freeze that lists clear steps for fixing leaks which, if read ahead of time, could cut down on unnecessary injuries perhaps. (No, I didn’t read that article ahead of time. I didn’t read it until now, when writing this post.)

“Ready to get started?” Nate asks.

“Yes—but the rule is—you can’t take over—no matter how much I complain.”

Step 1: Remove everything from underneath the cabinet—including the lovely bucket, which is full of two months’ worth of leaks.

Step 2: Shut off the water valves. (Turn to the right. Typically they are silver and they are right under the sink.)

Step 3: Activate the faucet by turning it “on” at the sink above.

Me: “Won’t that make the pipes fill with air?”

Nate: “No. You need the air to force the water out.”

Nate takes over. We break my first and only “rule” almost immediately. Sigh.

Step 5: Unbelievably, there are two MORE nuts at the base of the faucet and they are extremely tiny. I attempt to remove those too, but I end up letting Nate help.

Step 6: Pull the whole faucet out of the sink to examine its structure. There are some extra nuts that connect the wire tubes to the base of the faucet. We hope that all we have to do is tighten those to solve the problem.

Step 7: Put everything back.

I just look at him, while trying to massage my legs and back.

“Wow! We should celebrate!” I say. “Let’s get some Margaritas and a foam roller!”

Your Turn:  Have you ever fixed a leak?  What’s the biggest project you’ve tackled by yourself?

19 thoughts on “For Buckets of Fun, Fix that Leak!”