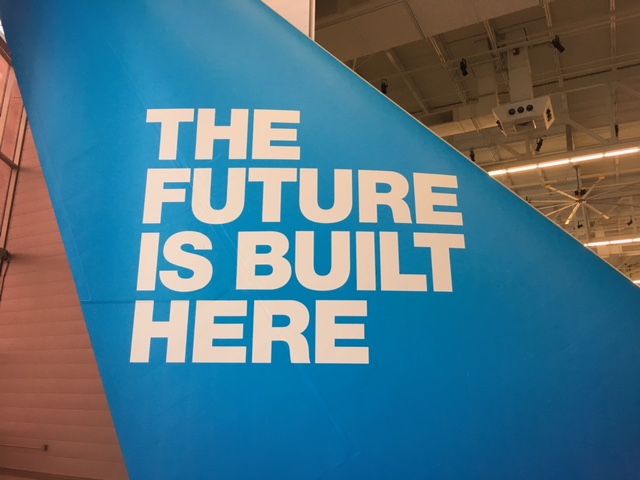 After a snowstorm forced us to forego banana splits for days—and eat a Valentine’s meal of frozen TV dinners —I turned to Nate and said,

“Now that the snow has melted, let’s get OUT of this house! Let’s just go crazy. Really crazy! We’ll just tear up the town—you, me, and Alex.”

And that’s how we ended up on the Boeing Factory Tour.

A tour costs $25 per person, which sounded like a lot of money to Nate, but just for comparison’s sake, we are also planning a trip to Kauai and wondering whether or not to book a luau. A luau is $100 per person. So, for a LOT LESS than a trip to Hawaii with a luau thrown in, a family of three can take a 90-minute tour of the Boeing Future of Flight Tour in Mukilteo, WA AND enjoy the hands-on exhibits. To add to the excitement, the website explains that actual workers are working on the planes during the tour, but the activity is considerably slower on the weekends because that’s when just the overtime workers or essential employees come in. That information did not deter us in the least bit. Someone would come in to work on a Saturday. We just knew it. 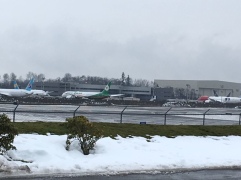 Planes parked outside the museum.Photo by Cecilia Kennedy.

Model plane on exhibit inside the museum. Photo by Cecilia Kennedy

Once inside the expansive and impressive museum center, we paid for our tickets and were told to leave our cell phones in a free locker. We considered just leaving our cell phones in our pockets and not using them and just lying and saying, “What cell phones? We don’t even know how to use them,” but we are horrible liars, so we locked our cell phones away in a keyless locker, which trusts that your memory is excellent. You will have to remember: the locker number and the code you chose. Nate chose both the code and the locker number and I didn’t see him write any of these things down and I didn’t have any writing materials with me, so I willed myself to remember that locker number and combination: #131; 1420. I repeated it to myself several times while waiting in line to enter the theater. (The tour begins with an inspirational movie, of course.)

Before the movie began, the tour guide and an armed guard of sorts teamed up to repeatedly remind us to leave cell phones in the locker and that we still had plenty of time to voluntarily lock our cell phones away. The last and final warning, from the security guard was a bit more stern: “If you are found with a cell phone, it will be taken from you and held for further review.”

Then, the movie played and it was hard to concentrate because I was still repeating the locker number and combination to myself in my head, but I do remember this: The announcer said something about the unique nature of the kind of Boeing engineer they like to employ: The engineer who asks, “Why? What if? Why not?” I, on the other hand, am not an engineer, so I continued to ask myself, “What is the locker number? 131! What is the combination? 1420! Good job, Cecilia. You deserve a treat in the cafeteria at the end of the tour. You will save the day!”

After the movie, we all got onto a nicely outfitted tour bus that whisked us away to the actual factory where we were warned about climbing stairs, walking about a third of a mile, and going back down the stairs—and riding elevators. Oh, and children have to be about 4 feet tall in order to be on the tour. Alex is nearly 6 feet tall by now, so no problem there—and I still remembered the locker number and combination. I was giving myself a quick “quiz” every two to three minutes, except for when we passed by some GE engines. Nate, Alex and I went temporarily wild with excitement because we KNOW someone who works on those engines: Uncle Jay. We made sure everyone around us on the bus knew that we knew “Uncle Jay” from Cincinnati and he works on those engines.   Woohoo! Shout out to Uncle Jay! We felt like rock stars.

The scariest part of the whole tour though, was not the stairs, which were narrow and steep, but the elevator, which was huge and fit the entire tour group inside, but I forgot to mention that I get a little nervous inside elevators. And the air was dry. Very dry in the building. Luckily, the elevator ride did not last long and there were plenty of factoids just spewing from the tour guide’s mouth. The factoids were extremely interesting, but they totally messed with my ability to remember the locker number and combination:

Tour Guide: Does anyone know what the 7 stands for at the beginning of the number? Right! That number refers to the kind of plane it is, which in this case, is a passenger plane. And the 7 on the end of the 747? Nothing! It’s pure marketing! It just sounds better that way.

Tour Guide: The entire Disneyland theme park can fit inside this factory with 12 acres left over for parking. Boeing employs about 35,000 workers that work on three different shifts. There is a full gym, flower shop, several cafeterias and . . . .

Tour Guide: Here below us on the factory floor, you can see the various sections of the plane: The fuselage, the nose, and the wings. This apparatus here that looks like a small house carries the parts to the different stations where workers piece them together. The wiring in this plane is about 130 miles long—about the distance to Vancouver from here. Anyone from Vancouver? The paint on the plane is only as thick as three sheets of notebook paper, but it adds around 550 pounds to the weight of the plane and the plane can carry about 63,000 gallons of fuel.

Then, we got to see a Dreamliner on the factory floor. Of course we couldn’t go inside, but we learned about how the lights change for international flights to make it look like a setting or rising sun, thus reducing jet lag. There are no window shades because you can just touch a button and windows block out or let in as much or as little light as you want.

“Hey, Nate. Are we booking a Dreamliner for our trip to Hawaii?”

“Nope. Just normal passenger planes all the way there and back.”

Then, as we were leaving the factory, Nate pulled me aside—along with Alex.

“Look straight down below us,” he said. “Look! There’s an engineer. Working! A real engineer working here on a Saturday.”

And sure enough, we saw one. We saw one of the Boeing engineers working overtime. He was wearing a blue dress shirt and sitting inside a giant windowless building at a cubicle desk and he did not look happy. He had his head in his hands and he was shaking his head back and forth and he looked very, very frustrated as he most likely asked himself, “Why? What if? Why not?”

So, I took this opportunity to ask Alex, “Do you think you’d like to be an engineer someday?”

Alex just shrugged his shoulders and asked, “Why?”

Maybe it wasn’t the best time to ask, but I thought, “Why not?”

Before we knew it, we were back on the tour bus and returning to the museum, but the tour guide had more factoids for us to digest: If we wanted to buy Boeing planes, they range in price from $89 million to about $495 million. In the gift shop, though, I found a five-dollar-“easy-to-put-together” foam glider model for ages 8 and up. I figured I could surely bust that out in a few minutes—and have a memento of my wild and crazy factory tour outing.

While I paid for my trinket, Nate assured me he would release our cell phones from prison and he said he remembered the combination and the locker number. However, I still remembered, just in case: 131, 1420. (Yes!) However, when I met up with Nate and Alex, they were just standing around the very locked locker and they looked as frustrated as the engineer on the tour.

“Did you remember the combination?” I asked.

So, Nate went back to the customer service desk and a woman stepped out from behind the desk and swiftly opened our locker with a master key. So, the biggest tip I can offer to families taking this tour is to just not even worry about remembering the locker combination. Remember the factoids instead.

And that “easy-to-put-together” foam model I bought? It only took me two beers and five steps out of 15 before I finally asked, “Why not? Why not just ask Nate for help?”

Your Turn: Are there any fun tours to take where you live? Discuss below.

39 thoughts on “Things to Remember on the Boeing Factory Tour”