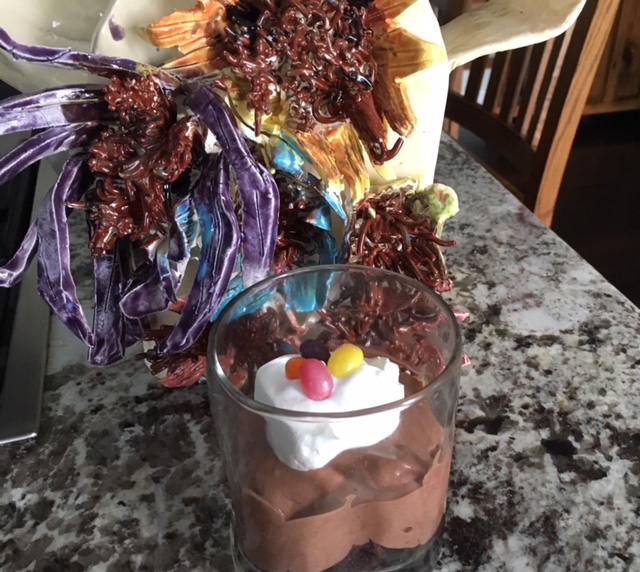 The hunt for Easter goodies took a dark turn when I discovered that all of the grocery stores in my area no longer carried the No Pudge! (fat free) brownie mix that I rely on for easy, “healthy” brownies. They’re the perfect treat for ending a Peeps-jellybean-mimosa-fueled binge on Easter Sunday morning. In fact, this is the best way I can describe those brownies:

It’s like little chocolate bunnies slide into pillowy clouds of chocolate pudding and come out all spongy on the other side—just dancing on my tongue and delighting my senses with little bursts of cocoa magic.

How was I supposed to recreate that miracle on Easter Sunday? How? Well, I think I may have done it. I found a recipe for fat free brownie mix from Genius Kitchen. (I’m including the link here.) However, instead of applesauce and a teaspoon of vanilla, I used ¾ of a cup of fat free vanilla yogurt. I also used ¼ cup of egg substitute instead of two egg whites and I helped myself to a “heaping” ¼ cup of dark cocoa powder.

Then, I got crazy. Well, not Fourth-of-July-seven-months-pregnant crazy when I ate the entire batch of No Pudge! brownies with a tub of whipped cream and a can of cherry pie filling, but crazy enough to combine chocolate brownies with pillowy clouds of actual chocolate pudding—and whipped cream.

“Oh, no—you’re looking at one dessert—with layers,” I said. Nate looked confused before backing away from the kitchen.

I guess he was hoping for a chocolate fountain this year. Now that I think about it, he may have dropped this hint more than once. Perhaps he thinks this fountain should go in his room. Perhaps he thinks he can melt the brownies and pudding down and make them into a fountain. I decided then, that I must put an end to this thought immediately.

“No chocolate fountains this year, but when I’m done making this dessert, every chocolate bunny within a five-mile radius will want to be invited to this party,” I said.

In fact, a rich, chocolatey dessert, topped with pudding, whipped cream, and jellybeans would be just thing Alex needed to end his first full week of driving on his own. He’s been out there, with his driver’s license, driving back and forth to swim practice, school, and to weight lifting. And, while he has enjoyed his freedom, he has found driving somewhat stressful. Here’s an example:

Alex: Pulling out of the gym during an Easter parade is crazy.

Nate: How did you avoid the traffic?

Alex: I just kind of pulled out of my spot and got behind a tractor and some bikes and a bunch of traffic cops. It was so confusing!

Me: Honey, I think you were in the parade.

Alex: I wasn’t in the parade.

Nate: But you were behind a tractor?

Me: And some random bikes and police cars?

Nate: Son, you were in the parade. You drove my car through an Easter parade route.

Me: Did you throw candy? That’s the most important thing. Next time, be sure to have some candy on hand, in case you’re ever in a parade again. It happens to lots of new drivers. You get your license and you end up in a parade. Just be prepared, that’s all. That’s all we’re asking.

But I could tell by the look on Alex’s face that: 1) he still didn’t believe he was in an actual parade and 2) a chocolate fountain in his room was just the thing he needed to deal with Easter traffic.

To nip the chocolate fountain disaster in the bud, I quickly whipped together some skim milk and a box of chocolate pudding mix. Once the mixture set, I added two cups of “lite” whipped cream and got to work assembling the dessert. The results were everything a chocolate bunny Easter parade dream could be.

If you want to recreate this experience in the safety and comfort of your own home, the recipe for the brownies and the pudding/assembly can be found below. Entire chocolate bunnies can probably be folded directly into the pudding mixture—I mean, why not? But once that happens, the bunnies can’t be thrown from your car during an Easter parade, if you find yourself behind festive tractors and police cars.

Ingredients for the brownie mix: Adapted from Genius Kitchen: No Fat Brownies by Faith It3:

Preheat the oven to 350. Mix the dry ingredients in a large bowl. Add in the wet ingredients and stir well. Pour the mixture into an 8 X 8 baking pan and bake for 20-30 minutes.

Ingredients for the pudding:

Directions: Follow the directions on the package for the five-minute recipe by adding the skim milk to the pudding mixture and beating the mixture with a whisk for 2 minutes. Then, let the mixture soft set for five minutes.

Fold in the two cups of “lite” whipped topping.

Cut out a square or a round brownie and place it inside a small glass. Add the pudding mixture and top with more whipped topping. Decorate with jellybeans.

Your Turn: Have you ever accidentally ended up in a parade? Or, what is your favorite spring time dessert?