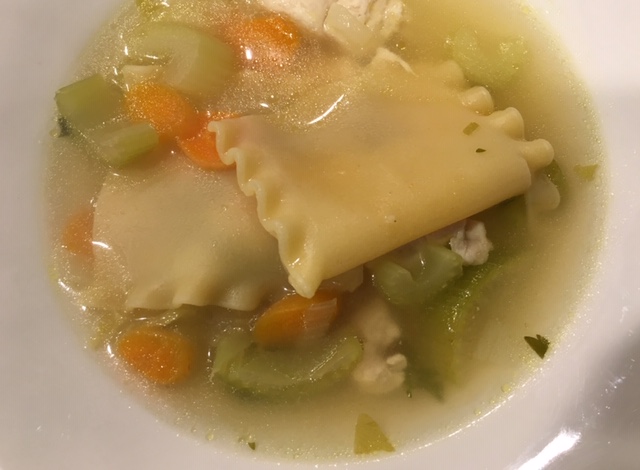 The cabinet below the kitchen sink comes alive with the eerie sounds of pots and pans that rattle, followed by deathly moans that exclaim, “Uhhhh! I’m making soooup. . . Dinner will be a while. .. Making soooup takes an eteeeernity.”

Nate runs into the kitchen.

“Right. Chicken noodle soup,” he says. “That sounds good. I could really go for a bowl. What can I get you? What can I do to help out?”

“Just give me a beer and 2-3 hours alone in the kitchen.”

Then, once Nate leaves, here’s what really happens:  I nurse the beer for an hour or so, munch on some cheese puffs, and watch cat videos on my phone, while the soup just sort of whips itself together.

As a result of my antics over the years, Alex and Nate are under the impression that this soup takes hours and hours to make. Well, once they read this post they will know that the chicken is out of the bag. I have a few tricks to make the soup taste like it has been stewing and simmering for a long time.

Alex, in particular, still has a wide-eyed look of wonder whenever I serve this soup, even though he’s 17.  (It’s so precious, really. I hate to ruin things for him, but it’s time. He can’t go around telling his friends that his mom makes homemade-from-scratch soup that is better than all the other moms’ soups out there. He’s getting too old to believe such things. People will begin to laugh.) He thinks that once he’s on his own, he’ll never be able to make his mom’s soup. Well, Alex, your mom is not as magical as you thought, but I’ll tell you what is:  a few sprinkles of curry powder and lasagna noodles.  That’s the magic. That’s all the magic you need.

The chicken noodle soup recipe that follows makes for a comforting and quick weeknight meal.  I know. I know. I’m supposed to start with a whole chicken and let it become broth in a crockpot or on the stovetop. However, I’m pretty satisfied with this simpler version I’ve cooked up over the years that uses canned chicken stock, some fresh vegetables, chicken breasts, and a splash of curry powder at the end. Broken up lasagna noodles are a more recent addition.  They take on a homey dumpling-like consistency in the broth.  (Sometimes I’ve also used a few threads of saffron instead of curry powder. Saffron adds a rich flavor as well.)

–two stalks of celery and their leaves, chopped

–4 sheets of lasagna noodles—broken into 2-inch squares, roughly. If they are uneven, that’s fine.

–Heat the oil in a medium-sized pan over medium heat.

–When the oil begins to shimmer, add the garlic. Then, cook the chicken in the oil/garlic mixture. (You can set it aside and keep it warm in the oven at this point, or just leave it in the pan to cook with the broth/vegetables. I’ve done it both ways.)

–Use about a tablespoon or two of the broth to scrape up the chicken and garlic pieces from the pan. (Do not discard them. Keep them in the pan; they are yummy.)

–Add in the onion, parsley, carrots, celery and about six cups of broth.

–Let everything simmer about 20 minutes—until the carrots are beginning to cook through. Top off the mixture with more broth, if it starts to evaporate.

–Add the lasagna noodles—and more broth, if necessary. If you run out of broth, water is fine—add just a pinch more of salt.

–Add the curry powder and let cook for 5 minutes more—or until the noodles are done to your liking.

And now, a letter to Alex:

It’s time for your mom to set the record straight.  Corpse-like creatures don’t emerge from the kitchen cabinets, rattling their pots and pans like chains, every time I make your favorite chicken noodle soup.  I’ve never had to wrestle a chicken into a pot or mess up my hair or hike to the top of a mountain to pick rare and special herbs.  All of these years, I’ve poured some broth into a pan, along with some fresh celery, carrots, garlic, parsley and onions and they’ve served as a fine jacuzzi for chicken breasts.  These ingredients would proceed to get happy and cozy without much help from me, thank goodness. Then, one day, I threw some curry powder in and well, the look on your six-year-old face when I served the soup that night! You would have thought that I had just said, “Alex! I brought home Grave Digger, the Monster Truck. It’s parked outside!  Go, drive it!”  And that’s the feeling I was hoping to capture for you for the rest of your life:  Monster Trucks and soup that starts with seeds from a garden and a chicken coop I’ve slapped together in the yard.   But I’m not Super Woman.  I just make easy things look hard. So, please don’t be scared to make this soup.  It’s not as hard as it looks. You got this! Everything you need is right within reach! Who’ll make magical chicken noodle soup now? You will. You have the magic.

—Nate’s cardiologist analyzed the data from his portable heart monitor that he had to wear for a week.  She explained that when Nate feels unnatural and hard heart palpitations, his heart is starting to beat from the bottom. (I guess the beat is supposed to start from the top. I’m not sure I understood the explanation, but Nate does, and that’s all that matters.)  In any case, the  cardiologist said that what she detected, is not a concern. Nate should just limit his caffeine and reduce his stress.  He will get an ultrasound of his heart just to make sure as well.

–I have a few new short stories of fiction out in literary magazines. Here are the latest: 1) “Screaming Into Bowls,” which is in Issue 3 of Whatever Keeps the Lights On and 2) “Gray Yogurt,” which is in The Writing Disorder. Enjoy!

Your Turn:  What kinds of kitchen hacks/shortcuts do you use in a favorite recipe?

28 thoughts on “Chicken Noodle Soup: The Secret Ingredient Is . . . Magic”