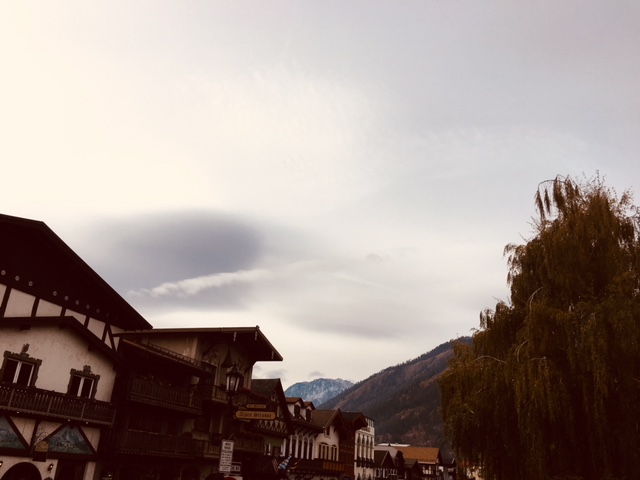 “Student Driver. Please be Patient,” written on a bumper sticker, does little to deter Starbucks fueled Seattleites from tailing the car and passing on narrow roadways at speeds 20 miles above the limit.

At the wheel, Alex appears calm, unshaken. Nate’s a mess. I’m in the backseat suggesting we turn on music because I’m bored and the fall scenery could be greatly enhanced by background music. Nate gives me a nasty look and invites me to sit in the passenger seat next to Alex, if I’m that bored. I decline.

“Why is everyone going so fast?” Alex asks as we head east on Route 2.

“Do you remember the first time we brought the cat home from the pound? And he ran all over the place really fast and up and down stairs?” I say.

“Well, it’s just like that. The drivers here were “rescued” from the pound (gridlock on I-5) and they’re running up and down the stairs of the new house (Route 2).”

Based on the silence that falls upon the car after I make my analogy, I pat myself on the back for providing a logical explanation, which turns out to be completely wrong. The drivers are racing to get to the Autumn Leaf Festival in Leavenworth, which is something we know nothing about. We figure we’ll have a relaxing time because we’re arriving the weekend before Oktoberfest, but when we make it to Leavenworth between 12:30 p.m. and 1 p.m., the roads are closed for a parade and Alex has to drive aimlessly down an unfamiliar street while asking, “What do I do now? Where do I park? Someone tell me something!” But we can’t answer him because we don’t know. Finally, Nate tells Alex to pull over and the two of them attempt a seat swap on a narrow strip of road with cars whizzing past. I’m not sure, but I think they kept the key in the ignition too, which would mean an automatic fail if this were Alex’s actual driving test. And, no one seems to worry about leaving Mom in the backseat unattended with keys in the ignition. I could have rolled away forever, with a “Student Driver, Please Be Patient” sign for an epitaph.

Nate finally parks us somewhere near the Bavarian-themed town of Leavenworth, where tourists attempt to wear lederhosen, even when it’s not Oktoberfest and even when they’re not really German. I assume it’s a dress rehearsal for the “real thing”—when the strength of lederhosen will be tested in the streets after a few steins of Grün Hopfen Pilsner.

When we get out of the car, lunch is first on our agenda, so we walk purposefully through the streets, not really stopping to watch the parade that goes by. However, there is a group of dancers who look like they’re between the ages of 40 and 60 and they’re wearing sparkly outfits and, well, they’re not very good at all, but they have a lot of spirit and I just know, with my dance ability right now, I could audition and get into the group and perform at parades. They look like they’re having fun, and that’s what it’s all about, right? No matter how bad a performance is, someone will always tell you, “good job” and it’s your job to believe only that person.

Of course he laughs, but I will find out who they are somehow. However, it also looks like the women have male partners and they get on their shoulders and flip backwards, while swinging about awkwardly and precariously above solid concrete parade routes. Nate would have to be my partner. We’d have to audition together. There’s no way in Bavarian hell he would do that.

Once we arrive at the restaurant, it’s not crowded at all because everyone else is outside watching the parade, so we get a table right away, near the window. After enjoying a leisurely meal and pints, we take a walk through the park and stop at every restroom along the way. Restrooms are strategically placed throughout the town, probably for good reason. (I get the impression that lederhosen accidents are frowned upon.)

When we return to the car, Alex is at the wheel again and the average vehicle passing speed has nearly doubled. The scenery just whirls by and I really want to capture it.

“Hey! If there’s a safe place to pull over, I’d like to get pictures of the trees changing color in the mountains.”

“Uhh, not sure that’s going to be possible,” Nate says.

So, I have no choice but to roll down the window and dangle dangerously from the side while snapping pictures with my iPhone. I’m also aware that the “Student Driver” bumper sticker is still on the back of the car and that my actions, right now, could seem “strange” to passersby.

“You don’t have to roll the window down to get pictures,” Nate says.

“I don’t want anything between me and the view,” I say, over the noise of the wind screaming past the window.

I realize that I could drop my phone and I’m not sure how good my pictures will be. I’m also getting a little nauseous, but I press on, truly believing that this is just the training I need to get into a sparkly outfit parade. To accomplish this goal, I’ll need at least 40 more hours of this kind of training and a new bumper sticker: “Sparkly Parade Trainee.  Slow Down and Give Compliments.”

Your Turn: Do you enjoy large crowds and festivals or do you avoid them?