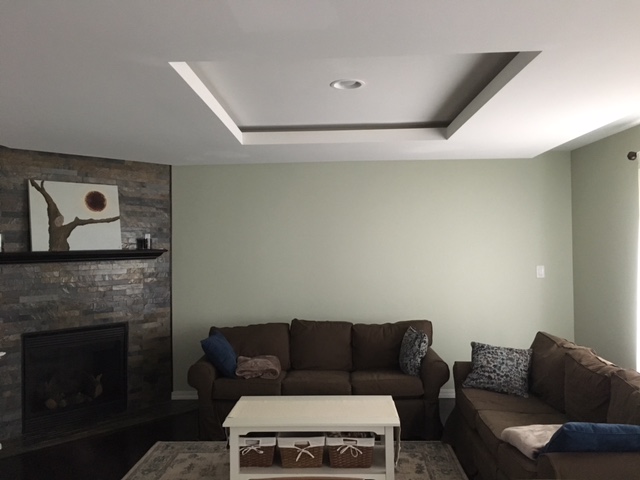 What’s dark and green and brown all over? You guessed it: My living room! Actually, it’s not that bad. I love the dark, wooden floors and I actually enjoy the light, cool green Nate and I decided to put on the walls. The chocolate brown slip- covers on the couches hide SeaTac the cat’s dark fur nicely—and it feels like home. Sort of. We definitely need more light.

“It’s like a cave in here! We live in a cave!” I complained to Nate one day.

“We could probably use a lamp in the back corner,” he suggested.

Yes. A lamp could solve all of our lighting problems—most of them anyway. When we bought our house, we noticed these square, recessed ceiling features that held the possibility of strip lighting thanks to some secret outlets attached to the outer edges. We could definitely tap into this feature someday, but we had other problems to solve first:

1) When turning the lights on in our house, it would take a while for the lights to “warm up” because the house came with older versions of energy-efficient bulbs. I’d flip on the lights, but I’d still be fumbling for my keys and tripping over the cat several minutes later. The cat was very annoyed. I really needed to replace those bulbs. So we explored our options for choosing new bulbs and replaced them. (See the “Weighing Our Options for Bulbs” below.)

2) The living room was still very dark—even when we replaced the bulbs throughout the house. For that problem, we could use a properly-selected floor lamp. (See the section “Selecting Our Floor Lamp” below.)

Weighing Our Options for Bulbs:

We switched from the bulbs that came with the house, to 60 watt LEDs for the bedrooms and hallways and 75 watt LEDs for the kitchen and bathrooms. We even set up a “smart bulb” system that dims the lights through an app we downloaded onto our smartphones. So cool!

The Energy Department’s website details many options available for energy-efficient bulbs. This website, for instance, identifies some of the most common kinds of bulbs, including CFLs (Compact Florescent Lights), LEDs (Light Emitting Diodes), halogens, and incandescents. According to the Department, just replacing five of the most commonly used bulbs in your house with “Energy Star” rated bulbs (from any of the kinds of bulbs mentioned above) can help you save energy.

Of course, you can’t just go about changing bulbs willy nilly. Any local government power and light website or safety manual will tell you the following: To avoid electrical injury or loss of life or property due to fire, do not exceed the wattage for your household. This wattage is typically written somewhere on the inside of your individual light bulb sockets in your house. This number refers to the wattage output. So, if the light bulb socket says “60,” you can’t use light bulbs that exceed 60 watts of usage. When we replaced the original 60 watt bulbs with 75 watt LED bulbs, we checked the package first. Though the bulb said 75 watts, the usage or output of wattage was only just over 13 watts.

Once I could turn on the lights in the kitchen and entry-way without waiting several minutes for the bulbs to “warm up,” I decided it was time to tackle the dark matter seeping into the corners of my living room. I’d consider the “perfect” floor lamp for that room.

I’m not much of a “home decorator,” though. Nate loves art and architecture and has a good sense of color and design, but lamps and lighting are a little of his league as well. So, I went online and found the website for the American Lighting Association. It was a fantastic source of information. There’s a governing board of experts and a conference in September. (Registration will set you back at least $500, though.) The site includes several articles about lighting and short one-minute videos featuring Laurie Smith from the Trading Spaces television show. From her videos I learned that lighting is an “unexpected element” and that, since the interior is a “natural projection of the soul,” lighting is “critical.” Additionally, she suggested finding objects of inspiration in the room to perhaps spotlight.

I also considered the tasks we accomplish in our living room. Typically, we watch TV, but we also read and study on the couch. The cat sleeps comfortably in this space as well. Nate and Alex like to eat yogurt on the couch, but that’s an activity I’d like to discourage. Maybe I could get flashing, warning siren lights that would “condition” them to eat the yogurt in the dining room instead. (Seriously—it’s just steps away from the living room.) So, the tasks I wanted to “encourage” with the correct lighting included watching TV, reading, studying, and petting the cat. For reading and studying, we would need bright light. For watching TV and petting the cat at night, we’d probably need softer light. A dimmer switch, then would definitely be in our future—in addition to the lamp.

So on a rainy Saturday, Nate and I went to Seattle Lighting in Everett. When I walked in the shop, I instantly wanted everything in there—both modern and classic. Our house is a mixture of the “classic Craftsman” with lots of modern pizzazz the previous owners added for effect. It certainly worked. We fell in love with all the modern updates. However, after a few weeks of moving in, I noticed Nate was frowning at the details. The moldings and fixtures weren’t quite in keeping with the classic Craftsman style.

“This is so wrong!” he would complain.

However, Laurie Smith’s videos on the American Lighting Association website gave me something else to consider: Sometimes modern fixtures could set up a contrast with traditional architecture in order to highlight or create certain effects. In other words, with just the right touch, old and new could possibly mingle.  In the lamp store, I wouldn’t have to limit myself to “traditional” or “modern” styles.  I could simply pick something I though might work.

Nate suggested getting a floor lamp with multiple bulbs we could position so that light could “bounce” off the wall at different angles. In fact, we saw what we were looking for, but, for me, it didn’t have that “artistic feel” the American Light Association videos talked about. Creating light in the house, according to those videos, should be simultaneously useful, creative, and fun.

Neither was Nate. So we moved on and found a floor lamp with multiple bulbs, framed by white glass squares. The style and shape of the lamp echoed the Mission Style line of furniture we brought with us from our Ohio Craftsman home. It had everything we were looking for: multiple sources of light and a style we instantly loved.

At the counter, we met Cody, who helped us select just the right bulbs for the lamp. Nate wanted 60 watt soft yellow LED lights. However, I wasn’t convinced.

“It’s sooo dark in that corner,” I complained.

But Nate loves sunsets and the glow of candlelight. I like bright beaches and white, blinding light. Cody helped us reach an agreement. He suggested a 72 watt halogen and a dimmer switch.

“Don’t halogens set curtains on fire? Didn’t that happen in the 90s?” I asked.

Cody nodded his head and showed me a lamp that had a protective covering over the halogen bulb.

Cody also showed us the difference between Nate’s 60 watt LEDs and my 72 watt halogens on a sample floor model lamp. The brighter halogen light seemed to instantly brighten my mood. After all, it was raining and had been for a few days now.

This little exercise in light bulb and lamp shopping doesn’t really scratch the surface of all the things to consider when choosing the “perfect” light. Other things to consider, according to techlicious.com include: Lumens: a measurement that tells you how much light a bulb produces—rather than the amount of energy it uses. (It’s listed on the package) and Color: which is measured in Kelvins. Actually going to a store and comparing and contrasting bulbs that are on display can help you determine the color you want.

So, here’s a picture of our living room with the new lamp:

As you can see, there are some dark corners still. That’s where “task lighting” or spotlighting an area could come in handy. We could finally try out those recessed strip light possibilities in the square ceiling feature above. Strip lighting might work. And/or we could get another lamp. If we wanted to go “hard core” we could study articles about designing with light and space from the Architectural Lighting industry magazine. Designers and architects are doing some pretty amazing things with light in terms of shaping the space around us—creating both utility and art for various effects. For now though HGTV.com and websites for Lowe’s and Home Depot have plenty of basic articles about three different kinds of lighting including task, ambient (or general lighting), and accent lighting. Nate and I may be interested in learning more about accent lighting, which could attract attention to a particular object in a room— like Nate’s paintings—but hopefully not the yogurt stain on the arm of the couch.