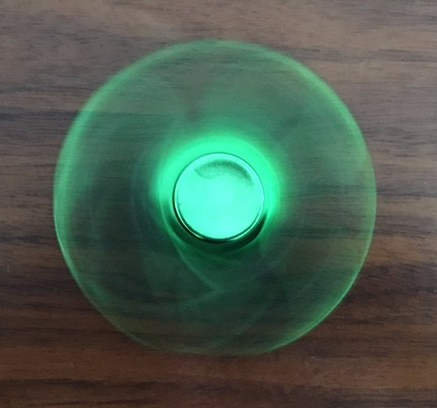 “Men’s Underwear on Sale” doesn’t sound too exciting, but a few weeks ago, it was my job to make this underwear sound like a must-have, on-trend shining beacon of wonder. I also had just under an hour to write 250 eye-catching words about this “Men’s Underwear on Sale.” The instructions stated that I should start with a verb, so I brainstormed the possibilities: Slip on? Wear? Don? I chewed on my pen, clicked the cap up and down, and wrung my hands. If only I could concentrate. If only I had:   A fidget spinner, known for its ability to focus the wayward mind.

I first learned about fidget spinners on LinkedIn. An article in my feed featured a picture of these shiny metallic gadgets, which definitely caught my attention and left me bedazzled. They were touted as the newest office toy, though they have been around for nearly twelve years according to a Washington Post article. They operate by the laws of physics and consist of 2-3 prongs with ball bearings in the middle. According to Justscience, the middle circle holds the spinner together. The prongs have ball bearings as well on the outer edges. As the spinner spins, the ball bearings reduce friction, so the spinner can whirl for a long time without stopping.

My son and his friend were more than willing to show me these laws of physics in action during a swim meet on Saturday.

“Mom, look! You put it on a flat surface,” Alex said, as he placed my newest office toy on top of a cooler lid. Then, he spun it while he and his friend stood by and watched.

The spinner seemed to be weaving a spell on the boys. Was it helping them concentrate? Was it making them smarter? What is the fidget spinner’s magic powers? According to Drs. Tranter and Kerr, fidget toys can help children develop “self-regulatory skills,” when coping with ongoing stress. If presented with too many distractions in the classroom, fidget toys perhaps could help them “power down” and re-focus. Recently, a university professor tested a similar theory on university students in his “Site Construction” courses between 2008 and 2011. Dr. Slater concluded that students perceived that fidget toys were valuable in helping them re-focus their attention.   He used a 12-question Likert Rating Scale survey for 246 students. According to Slater, modern distractions for university students can include any of the following: fidgeting, chewing gum, chewing on pencils, nail biting, hair twirling, nose picking, clicking pens, tapping fingers, sleeping, doodling, eating food, drinking beverages, using cell phones, working cross-word puzzles, reading, and completing other assignments during class. At the end of each semester, many students seemed to accept and use the fidget toys when they encountered distractions. Several seemed to state that they were helpful.

However, some classrooms and schools around the United States and the United Kingdom have banned their use. According to Valerie Strauss’s article in the Washington Post, teachers and administrators believe that fidget spinners are too much of a distraction or can be dangerous. After seeing the spinner whirl about on top of a cooler lid at a swim meet, I wondered how dangerous they could be. As I scrolled through articles on my Iphone, I realized that there is more to this gadget than just spinning it around. I was missing out on a world of “tricks.” In fact, the YouTube video, “5 Easy Fidget Spinner Tricks,” showed me that I had much to learn. In less than two minutes, I caused a lot of damage. The “hand transfer” resulted in a knock on the side of my husband’s head. (He’s fine–just a little surprised.) My “hand wave,” I believe, was smooth and magical, but Nate, who was most annoyed by now, did not agree with my assessment. I wasn’t able to pass the spinner behind my back because it ended up in Nate’s lap. When I told him I only had two more tricks to go, he threatened to take the fidget spinner away. (Ahhh! Now I get why they’re banned!)

Alex’s friend showed me how he was able to balance the spinner on one finger, but he told me his school was banning these toys as well. Alex said that the kids at his school aren’t allowed to play with them either. He said that they were an “under the table kind of thing” because they sometimes got flung about the hallways.

I can’t tell you what effect a fidget spinner has on me—except that it helped me get through a VERY long swim meet. Even though I didn’t have a fidget toy when I wrote my “Men’s Underwear on Sale” description, I did eventually come up with a suitable starting verb: Take—as in: Take on the day! If I had a fidget spinner though, who knows what I would have come up with? Perhaps: Give—as in: Give these briefs a whirl!

I guess it just depends on how I’d spin it.

Your Turn: What are your distractions and what do you do to re-focus? Share and discuss!