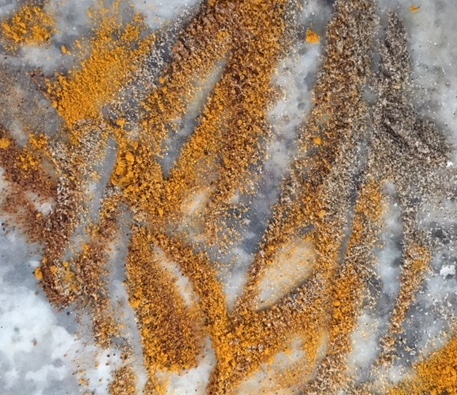 Culinary creations of our wildest imaginations happen when I crack open a beer, pull out the spice drawer, and announce to the family, “The weekend has arrived. I’m letting loose!”

The cat then makes a run for the safety of Nate’s lap because he has no idea what will happen next when I blindfold myself, spin around three times, and pull out random spices from the Wild Card Drawer, which is what I call the place where I store my spices.

One Saturday night, in the winter, this is sort of kind of how my “Winter Chicken Stew” recipe was born, but I also make it in the fall and on cold, rainy April days, like today. On the Saturday night that I first made my stew, I pulled out cinnamon, allspice, cloves, and cumin. At least, that’s how I think I remember it. This flavor combination ended up being satisfying and warm.

However, I was a little concerned when I first started to smell the ingredients coming together. The stew gave off a very sweet odor—like liquid gingerbread cookies steaming up the house. So, I began to imagine sweet bits of chicken, stuck inside gingerbread cookies and I briefly considered dumping the whole thing and ordering pizza, but I’m glad I didn’t. The flavorful broth, tomatoes, potatoes, and vegetables—along with the chicken—made for a savory and tangy concoction.

I suppose I could add raisins to enhance some of the sweeter spices like the cinnamon. In fact, for lessons on brave and bold savory-sweet combinations, I have to look no further than medieval recipes in England, which call for fish pies. These recipes include ground up fish flesh, sugar, spices, and eggs all baked together in a flaky crust. Oh, the fun people of yore would have if handed a banana-cream pie, a tuna, and a box of Nilla wafers!

In any case, making this stew reminds me to be more adventurous with my spices. I don’t want to meet my maker someday and worry that I haven’t used enough cardamom in my lifetime. I don’t want to fret over the times I was blessed with not only cardamom, but also with beans, lasagna noodles, peanut butter, and ground beef—and didn’t make a pie. How embarrassing that would be!

1 pound of boneless, skinless chicken tender meat, cut into pieces—sprinkle with just a bit of salt and ground black pepper

½ cup of red potatoes cut up

½ cup of carrots cut up

1 yellow squash or zucchini—sliced or spiralized

In a medium pot/saucepan, heat up the olive oil over medium heat and add the garlic. Brown the chicken pieces and set aside.

In the same pot, add all of the vegetables, including the tomatoes.

Then, add the chicken broth and spices. Cook until the carrots and potatoes are just about tender.

Finally, add the chicken back in, ensuring the pieces are cooked through. Salt to taste.

Serve with plenty of bread.

Your Turn: What are your favorite spices to use?