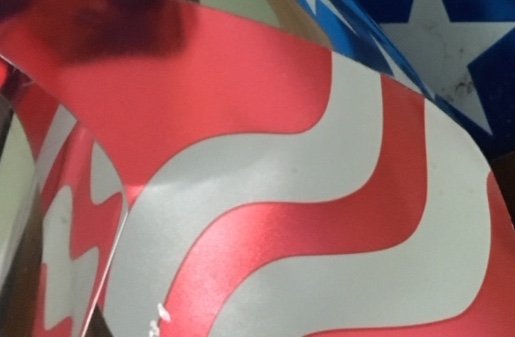 When the sky hits your eye—and hair and legs—with fiery pellets from the fallout of extremely enthusiastic fireworks displays, that’s “amore,” Fourth of July style in my neighborhood. The action starts off innocently enough around lunchtime with a few blasts, which really makes that boring peanut butter sandwich taste so much more—I don’t know? Dangerous? (If “dangerous” was a flavor, it would taste like peanut butter and sulfur.) Then, someone down the block dons an Uncle Sam top hat of sorts and stumbles about the street with a box of “Shock and Awe” supplies in one hand and a Solo® cup in another. When these two things happen, the action really starts to heat up, and last year, I missed it all because I was hiding under the bed. (No, the cat did not keep me company. He fared much better than I did. In fact, SeaTac the cat is seriously considering taking me to the vet’s next year to be tranquilized.) It’s technically not illegal to shoot off fireworks in the unincorporated areas of the city/county where I live, so everyone whoops it up—and no one can stop them. There are just too many of them to stop, really. Even in cities around here where fireworks are illegal, brave citizens band together in a spectacular display of civil disobedience. However, this year I was determined to really try to “get into” the Fourth of July, but I keep thinking I could have done better. Here’s a list of things I did–and other things I might do next year to improve my Fourth of July experience:

1) Consider investing in a portable toilet I could park outside my house. Just a few days before the Fourth of July, the neighborhood Facebook page lit up with rumors about a portable toilet/restroom situated right in front of someone’s house. I did not see the portable toilet in question, but I do believe everything I read on the neighborhood Facebook page, so I’m sure it’s true. At the time, I couldn’t imagine why anyone would need a portable toilet so close to the house, but after watching the fireworks from a neighbor’s house across the street, I understand why. Imagine this scenario: You happen to be just steps away from your house—laughing and talking with neighbors and nervously asking about fires that might happen—when suddenly, you need to use the restroom. Certainly, it’s ridiculous to ask your neighbors to use their restroom because your house is just literally across the street. However, if you run across the street, you will be hit. No one stops for pedestrians. You might feel the urge to yell, “Seriously! Aren’t we all homeowners? Why do we have to get the HOA to approve our house colors if we’re going to do this every year?” But no one will listen. No one cares. So, I figure if every single neighbor got a portable toilet, no one would have to run home and get hit by the crossfire. And, since charity begins at home, I’ll get the ball rolling and will order one for my house as a neighborly example.

2) Decorate my office chair for the neighborhood parade. Sometime in the afternoon, there’s a parade for the children in the neighborhood. They decorate their bikes, scooters, wagons, electric car-like things that scare the crap out of me, and roller blades. I brought candy to throw at the children because that’s what I thought people did at parades, but Nate reminded me that the children are the ones who are supposed to throw the candy—not the bystanders. However, not even the children brought candy to throw. So, I folded up my bag of candy, clapped for some kids that came tearing through the cul-de-sac and went home. “Next year, I’ll decorate my office chair,” I said. “I’ll bring buckets of candy and I’ll throw it as I go down the hills.” Nate totally dared me to do it because he knows I’ll probably chicken out. The hills in our neighborhood are intimidating. The office chair wheels will fall off and I’ll end up in the hospital before the fireworks even start.

3) Create the Freedom Fountain. Since most people in the state of Washington would rather light their own fireworks in residential neighborhoods, using professional grade explosives, I’ve decided that there’s not much homeowners can do to protect themselves, other than buy insurance, water the lawn, and keep a few fire extinguishers on hand. Once, Nate even reassured me that the roof could not possibly catch on fire because it’s “just asphalt up there.” He also told me that my neighborhood is full of smart people who work at Boeing. However, on the night of all of the explosions, which danced over the rooftops of our house and all of our neighbors’ houses, Nate suddenly thought of various ways in which fireworks could get caught under roofing materials.  “But that’s rare, right?” I asked. “No. It could happen. It could really, really happen,” Nate said. So, I put him and Alex to work. I thought maybe we could cover our house with a giant wall of water—a raging fountain of sorts that lights up in red, white, and blue. I decided I’d call it the Freedom Fountain and it would rain down over our house and extinguish any wayward flames before they got started.

Nate: I really don’t know what you want me to do here. I mean, how would you even do such a thing?

Me: I don’t know. Just use your imagination—money isn’t even a factor—or logistics—just go crazy. It doesn’t mean we actually have to do this.

Nate: The only way it could even maybe conceivably work is to use a power washer and just rig it up the side of the house and use Christmas lights or something.

Alex: Okay, Mom. I think we need a bubble. I could cover the house in a bubble of water.

Alex: Water just kind of cascades out in all directions from a nozzle on the rooftop.

So Nate and Alex both drew up their plans, which I’m including here below:

Both plans perhaps could work, though I’m probably not going to implement either one. Every time I mention the Freedom Fountain, Nate either gives me a nasty look or starts laughing, but for the first time in my marriage, I’m not trying to be funny. I’m trying to be practical—and festive at the same time. Nothing says “practical and festive” and “safety conscious” like a Freedom Fountain—especially after a long day of careening through the neighborhood on an office chair.

Your Turn: How did you celebrate the Fourth of July?

Bonus Treat:  Video Footage from the fireworks in our neighborhood–I’m filming from across the street from our house.

24 thoughts on “The Freedom Fountain and Other Things I’ll Make Next Year, July 4th”