After a rump-numbing, two-hour wait at the Washington/Canadian border, you’ll have plenty of time to avoid all of the traditional touristy things in Vancouver because they will all close in one hour and the line to see them will be at least two hours long. This situation eliminates the pressure of having to see the aquarium, the Capilano Suspension Bridge, the Fly Over Canada ride, Gaston, Yaletown, and Granville Island—all in one day. Before blaming the family for not leaving the house earlier—even when you got up at 5 a.m. to do the week’s grocery shopping so you wouldn’t hold anyone up—AND—even though you wrote on your calendar “get a Nexus Pass,” but you went to the zoo instead, don’t fret. Put on your walking shoes and enjoy the scenery. Remind yourself that you already saw your life flash before your eyes on the Capilano Suspension Bridge last year in June and realized that life’s too short to spend any of it suspended from a bridge. You also saw Granville Island, Gastown, and the aquarium just last October—peacefully—without any lines, so now it’s time to see the things you haven’t seen yet, such as the following:

–Random water features that flow from the random architecture

–The “cabin” exhibit at the art museum

–Dancers practicing their hip-hop routines on the ice rink

–Galleries that sell Salvador Dalí and Renoir paintings that look pretty darn authentic—and pricey (But do go ahead and touch the human-like legs jetting out from the Dalí piano sculpture—you know you want to and it’s totally okay. I did it and no one slapped me.)

–The inside of the Cactus Club Café (restaurant)

–Live music performed with an acoustic guitar and an iPhone

1) If you leave the suburbs of Seattle on a Saturday in the summer at around 10 a.m., you’ll hit the border at around 11 a.m. or 11:30 a.m. Inevitably, you will pick the slowest line and you’ll fight over the small bag of pretzels one of you thought to bring as a snack before lunch. Forget about lunch. It’s not happening. You’ll sit until at least 1:30 p.m.

2) Travel about 45 more minutes in very slow traffic until you get to your hotel. Throw your bags in your room, wipe the grime from your face, and find the nearest Tim Horton’s. The nearest Tim Horton’s, in Canada, is literally right behind you and it’s a shining oasis at the end of a dry, stale pretzel littered road from the border.

3) Go to the waterfront and consider riding the Fly Over Canada ride anyway. Then, look at the prices. For a family of three, you could spend about $100 for 8 ½ minutes of “flying over” attractions you already saw in June and October of 2017.

4) Decide to hail a taxi and go to the aquarium anyway because you just might make it, but when you get there at 3:30 p.m., the line is 30-60 minutes long, the aquarium closes at 5 p.m., and admission for a family of three costs $150. (I’m assuming Nate has already done the math and it doesn’t matter if the $150 is Canadian or “American”—it’s still too much, since we’ve already seen the seals swim and splash in a clock-wise fashion and then they switch into a counter-clockwise route for a grand finale at the end. Why spend the money when we can watch salmon swim upstream for free at an industrial park in the fall?)

5) Walk through Stanley Park and admire all of the wedding parties stopping to be photographed. Step out onto the streets downtown to admire some architecture, water features, hip-hop dancers, and enormous blueberries that look like they could perhaps really be figs and not blueberries.

Downtown Vancouver near the art museum. Photo by Cecilia Kennedy 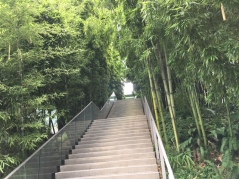 Walkway with stairs and bamboo. Photo by Cecilia Kennedy

Fresh fruit and “blueberries” outside of a market downtown. Photo by Cecilia Kennedy

6) Make it to the art museum before it closes in an hour and spend only around $50 for a family of three. That’s a real bargain because you get to see many different kinds of cabins and grab a headset in order to listen to an actual artist scream into a bowl. It’s unclear as to how screaming into a bowl leads to the creation of a cabin or vice versa, but I’m willing to experiment on my property because I think the backyard needs an exercise “building” and a tiny, cabin-like structure might do the trick. I have plenty of bowls—just need to get the proper permits before I start screaming into them, I guess.

7) Wander through the expensive CF Pacific Centre Mall and marvel at all the things you’d buy before you realize, “I go to the grocery store and swim meets. Where would any of these outfits be appropriate for those occasions?”

8) Experience a delicious meal at the Cactus Club Café on Burrard Street and order plenty of Happy Hour drinks.

9) Wander through glitzy hotels near the waterfront, while looking for public restrooms, thanks to the Happy Hour drinks.

10) Finish up at the Fairmont Hotel on the waterfront where you can order some desserts and sip on port wine while listening to live music. An acoustic guitar version of Frankie Valli’s “I Love You Baby,” with original accompaniment recorded and played on an iPhone, had me singing out loud—or maybe it was the Happy Hour earlier and the port I was sipping.

11) Leave happy—genuinely happy—and not feel disappointed or like you missed out on anything. You spent quality time with your family, in new scenery, and maybe saved a little money.

12) Decide you’ll definitely go back again with a Nexus Pass, a larger bag of pretzels, and a desire to buy any outfit at the CF Pacific Centre Mall that will allow you to attend the next swim meet in a most excessive and unnecessary manner.

Your Turn: Have you ever planned a vacation that has not gone “according to plan,” but it still turned out well? Discuss!