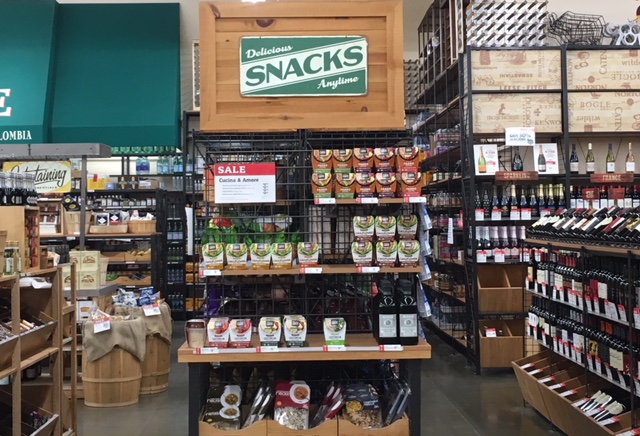 Jelly fish appear to have invaded my pantry because, if I look closely, I can see tentacles poking out from the shelves—and clear bellies filled with “hot n spicy peanuts mix”—held together by a twist tie that seems to be gagging the whole thing in a most unsightly manner. And it’s not like I go looking for these plastic baggie creatures that just get thrown about carelessly in my pantry. They stare at me from the transparent window on the pantry door. It’s like I’m walking past an aquarium. I have no idea which snack will drift lazily from a shelf and perhaps devour a can of corn.

In fact, I knew that this pantry door would be trouble when I first saw this house two years ago before we bought it. See-through pantry doors are attractive, but there’s a lot of pressure to keep even the nooks and crannies of a pantry clean and organized. It’s hard enough to just make the bed and remember to pick up the cat toys before I stumble about the house in the morning, but now I have to remember to also straighten the pantry, which is no easy task because this family needs snacks. Lots of snacks. Nate runs and lifts weights and Alex is a competitive swimmer who also lifts weights. I mostly run, but for strength training, I lift and hold the 15-pound cat for a one-rep maximum, so that’s enough for me. This activity still requires snacks, though. Not as many as Nate’s and Alex’s activities, but still. I like my carbs.

When we run out of snacks in the middle of the week, Nate and Alex make grocery runs to buy things in bulk and they come home with items wrapped in very unattractive plastic bags with long “tails.” They proceed to throw these items haphazardly onto the shelves when I’m not looking. Then, when I turn around, I scream because I’m so startled.

Nate rolls his eyes because he knows I’ll use any excuse to buy cute plastic containers and “stacky packs.” In fact, I recently made it inside of a Container Store this year and, I think I may have blacked out from the excitement. Nate and Alex each have a different version of the story, but the words “hit the floor” and “clutching chest” and “CPR” have made it into both versions. I’ve decided that I want to spend my birthday in the Container Store, but Nate and Alex really don’t think that’s a good idea, considering my delicate nature. They suggest margaritas at La Palmera instead. I’m not sure why I can’t do both.

So, instead of the Container Store, we go to Haggen’s to buy more snacks and a set of 14 containers, in various sizes for around $5.00, which is a bargain. When we get home, I start removing the items from their bags and packing them into containers. Some snacks that we eat belong in the refrigerator and, while I like to remain organized, I’m not crazy. I can’t organize the refrigerator—not even in case we get one with see-through doors, which exists now and I don’t know why. I’d feel like I needed decorative shelf liner or something and that’s just getting ridiculous. So, there are snacks that will just have to contain themselves for now, such as V-8 juice, string cheese, yogurt, sandwich meat, and bagels.

Then, there are snacks that just come in their own containers and I’m fine with that: cereal, chips (that’s what chip clips are for), beef jerky, and Nate and Alex’s protein powder, which they can’t live without.

The things I actually put into containers include: dried fruits, spicy peanut mix, Japanese rice cracker mix (which only lasts about 1 ½ hours, if that in our house), granola, and trail mix. These items stay fresh quite well in plastic containers. The following items do not stay so fresh in containers, based on horrible experiences I’ve had: bananas and avocadoes. The bananas can rest comfortably on the counter top, but I don’t need avocadoes randomly rolling about, so now I just buy avocado dip, which comes in its own container and stays behind the closed doors of the refrigerator.

Finally, I also buy bulk-size Baked Lay’s chips in individual “snack” packs, but they come in a rather large plastic bag that I don’t want to see thrown on the floor of the pantry. So, I take the individual bags out of the larger one and place them in decorative baskets that rest neatly on the shelves.

When I’m done, I survey my work and I feel better about the pantry, though I should more systematically go through all of the items—especially those on the top shelf, to make sure we don’t have any non-pantry items up there, such as socks. The thought of storing socks in my new, semi-organized pantry is now so alarming, I call a family meeting to go over a few rules:

1) We now have containers. No more plastic baggies stuffed between the Lay’s chips in the baskets.

2) If one container is mostly full and another one is only a little full, do not combine the items, unless they are exactly the same. For instance, granola does not need to be mixed in with Japanese rice crackers, no matter how efficient you think this arrangement may be.

3) If a container is empty, take it out of the pantry and wash it.

4) Only food goes into the containers and in the pantry. Get your own stacky packs for tools, loose screws, and safety pins. Might I suggest a trip to the Container Store?

While I go over the rules, Nate and Alex are stuffing trail mix into their mouths and scrolling through Instagram photos on their phones, so it’s not like they can say “no” to my request to go to the Container Store. Therefore, when it’s my birthday, I’ll remind them of that time I was going over pantry rules and they agreed that it’s a really good idea to spend my birthday at the Container Store.

After going through the rules, I walk away from the pantry, but out of the corner of my eye, I see what looks like another “tentacle” sticking out from the cabinet beneath the sink. In a momentary lapse of sanity, I actually consider pulling on it to see what comes tumbling out, but I decide to just contain myself, for now.

Your Turn: How do you stay organized throughout the year?

18 thoughts on “Pack that Snack”