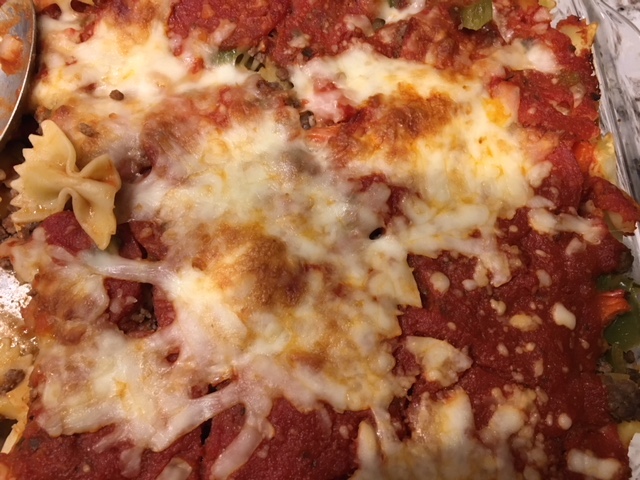 Pizza Pasta Panic is a chaotic, yet tasty blend of bow-tie pasta elegance and pepperoni pizza. It also perfectly describes my state of mind when I was making this casserole: Confused. Very confused, but determined because I signed up to bring a pasta dish to a swim team pre-meet potluck, which is very, very intimidating. It’s intimidating because I don’t want to embarrass Alex with the food I make. I don’t want him to say, “Mom, my friends said, ‘Dude, your mom makes weird stuff.’” In fact, if I serve consistently weird or tasteless dishes, will potluck organizers be able to program Sign Up Genius so that it “malfunctions” and sends out alarms when I attempt to sign up? I actually wonder about these things. Here’s the fantastic news though: “Miles” (whose name I’ve changed here), on Alex’s swim team, tasted Pizza Pasta Panic and said, “It’s good.” Alex also said it was “good” and “spicy.”

To sum up so far, then: There are exactly two reviews of this dish, and, drawing creatively from those reviews, this is how I’ll advertise my casserole on the Internet: For a good and spicy time at a swim meet potluck, dive into some Pizza Pasta Panic.

However, winning over two swimmers at a potluck does not easily “happen” overnight. It takes about a week’s worth of careful consideration and planning.

“Someone already signed up for macaroni and cheese!” I told Nate early on in the week. “Macaroni and cheese! That’s like. . . the best thing in the world! The absolute best! And it’s rude to copycat. That’s the unspoken rule about potlucks. You can’t copycat on purpose.”

At one point, I thought I’d just empty a box of boiled penne into a 9 X 13 pan, cover it in spaghetti sauce from a jar and heat it all up with cheese, but where’s the love in that? Where is the love? No. I’ve contributed nothing to the team so far. Nothing. I’ve not volunteered to time or count laps or pass out snacks. I needed to mess up my kitchen and show some love. So, I started to look at some recipes online and the pizza/pasta mash-up is not new. Lots of people cook pasta in 9 X 13 pans with pepperoni and either some version of Italian sausage or just ground beef. After looking over a few recipes, I told myself, “I got this. I’m going in.”

To get really creative, I decided I’d use a pasta shape that people just tend to overlook at potlucks: the bow tie. My son is on the men’s high school swim and dive team after all. What better way is there to remind these swimmers of the gentlemen they are than to have them eat bow tie-shaped pasta? Beneath the tough exterior of these Speedo-clad competitors beat the hearts of young men who convene in the hot tub after practice and discuss politics. So, let them eat bow ties—and wear some pants. (Alex, please remember pants when walking back to the car after practice.)

I decided then that bow tie pasta would be my “base.” However, I did cheat a little bit by buying the “traditional” marinara style Barilla pasta sauce because making and canning my own sauce, an hour before the potluck, just wasn’t going to happen. Now, here is where the love came in: I heated up a pound of ground beef with chopped garlic, diced red and green bell peppers, some onion, a little bit of sea salt, and just a sprinkle of red pepper flakes. Then, I just started layering everything—like a mad woman because I was running out of time: sauce, pasta, beef, pepperoni, cheese; sauce, pasta, beef, pepperoni—lots and lots of cheese. But I lost count of my layers and I can’t remember if I doubled a layer of pasta and cheese and forgot the sauce, or if I just dumped a bunch of sauce over some cheese at some point. In any case, I threw the whole thing in the oven at 450 for 20 minutes, pulled it out, and shouted, “Drive, Nate! Drive! It must get there hot!” There was no time to even taste it. It just had to get there.

Meanwhile, I started on the meal Nate and I were going to eat for dinner because parents weren’t really “encouraged” to eat at the potluck. It was for the swimmers/divers and coaches, really, but I suspect some parents may have snuck a bite or two. Finally, when Alex came home, I pounced on him with questions:

“How was it? Did you have fun? What did you eat? Tell me everything.”

“I had fun, but I can’t remember everything, but I liked the thing you made—and Miles said it was good, too.”

“Oh—and the macaroni and cheese was awesome.”

“There was also this shrimp soup, too. It was really good.”

“Since when did you start eating shrimp? I could be making delicious shrimp dishes and you’d eat them? I could have been buying shrimp this entire time?”

“Was it a curry based shrimp soup? Did it have coconut in it?”

Nate, who was trying not to laugh, reminded me that it was late and that Alex had a meet the next day.

“But did anyone get sick?” I finally asked.

And that’s the important thing. No one that I know of so far got sick from the Pizza Pasta Panic. Oh—and “Miles” from the high school swim team says it’s “good.” Blessings and hugs to “Miles.”

Your Turn: What’s your go-to dish for a potluck?