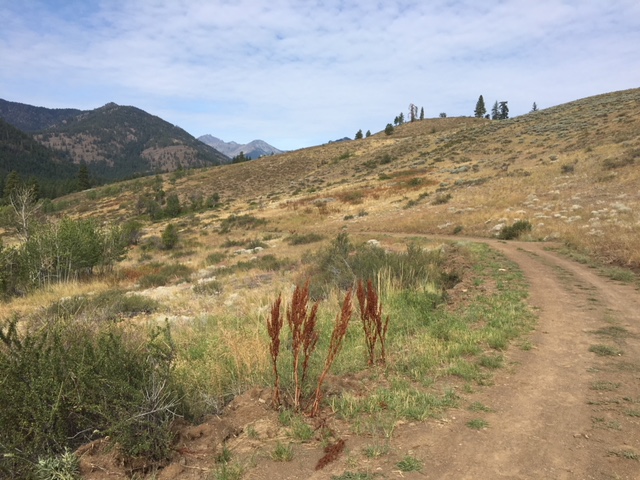 The size of a suitcase is only limited to the size of my imagination, when I pack for the annual family Sun Mountain Lodge vacation.  I imagine that, if we’re staying four nights, I’ll need about four bags:  two big bags, a smaller bag, and a purse that’s stuffed to capacity.  The family Subaru is not limited to one carry-on and one personal item per passenger.  No! There’s room for all kinds of bags, including a ginormous Styrofoam cooler and a big box of food.  It’s also okay to throw in a few towels and much more than 3 ounces of bug-spray and sunscreen without ending up on some kind of “no-fly” list.  Bug-spray and sunscreen, in my hands, only pose a danger to myself if I get confused and point the nozzle at my eyes—while Nate and Alex take turns driving on twisty mountain roads.  Knowing that this could actually happen, Nate has taken the proper precautions and has packed more “dangerous” items far from my reach.  (The more I have to struggle or crane my neck to get something, the less likely I’ll keep trying.)

Typically, I’m not this reckless and wild when packing for a trip, but I’ve already survived two plane flights this year for which I’ve made lists of things I “wished” to take. Then, I had to cut that list in half—and then half it again—in order to shove everything into something that could fit under the seat of a plane.  I’ve watched in terror as flight attendants spotted roller-bags and stopped people from boarding the plane with them.  Even though they were regulation size, the overhead bins were magically already filled and “sky-check” was just not happening.  Instead, those passengers had just won the thrill-of-a-lifetime prize of free lost luggage.  No thanks.  I will stuff 2-3 outfits and toiletries into one impossibly tiny bag and just wear all of my other clothes on the plane.

But. . . when packing for the family road trip to Sun Mountain Lodge, I splurged.  I made one list of everything I could think of and then I added onto it. I cut nothing.  It felt great.  It felt like I was living my best life—the kind that people write about in books like this one:  You are a Badass:  How to Stop Doubting Your Greatness and Start Living an Awesome Life.  Yes—the first step to loving my “badass self” on vacation was filling up a large suitcase, finding another one in the closet, and stuffing that one full as well.

So, here’s how I survived a four-day trip with just four “badass” pieces of luggage:

Inside the Big Multicompartmental Suitcase I Stuffed:

–Three pairs of shoes—all of them crappy—all of them wrapped tightly in plastic shopping bags.

–Three swimming suits—in case I ripped two of them. I don’t know how that could happen, but it could happen.  The bathing suits could get caught in a car door and get dragged several miles before I’d realize what was happening.

–Every pair of socks I could grab in two “fistfuls” from my dresser drawer.

–All of my underwear. All of it.

–All kinds of running clothes.

–Toiletries in the front pocket. (Here, I actually went with the 3-ounce rule.  I’m not sure why, but I guess some habits never die.)

Inside the Other Large Bag, I Packed:

–A bunch of “nicer” shirts.

Inside the Smaller Bag, I Packed:

Inside my Purse, I stuffed:

Did I use everything I packed?  Not remotely!  I have no regrets.

Did I forget anything? Nope.

Which was harder: packing or unpacking?  Definitely unpacking and trying to remember where I found everything in order to pack it in the first place.  That is definitely one “downside” of packing like a badass.

Your Turn:  How do you pack for a trip?