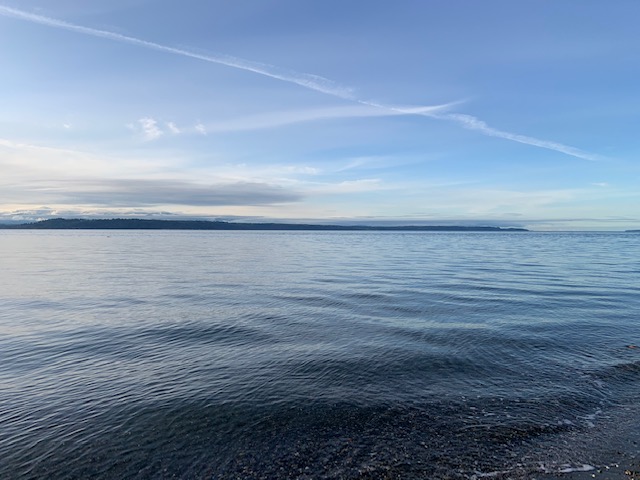 –Go to Hawaii with the family: Nailed it!  We swam with a barracuda too, which was not on the goals list.  That would never be on the goals list—ever. This kind of thing just happens to me all of the time.  I wish it wouldn’t.

–Audition for and get a part as a Snowflake Lane Dancer in the Bellevue Snowflake Lane holiday extravaganza.  This did not happen, but I did attend as a spectator, and was grateful that I did not have to dance in the pouring rain.  Not only is dancing in a cold, rainy downpour, a potentially miserable and dangerous disaster-waiting-to-happen, but I don’t think I could even pretend to smile under such circumstances. I might even say some swear words, and then I’d get kicked out of the parade; so, you’re welcome, Snowflake Lane.  I’ve spared you a lot of trouble.

–See an orca.  I did not see any orcas in 2019. It’s not like I’m not doing my part, either.  I am really trying hard to see orcas, but I just don’t think they want to see me. I did see a number of sea stars, which were really cool—and a few seals as well—but I just don’t know what I have to do to see an orca.  I suppose I could sign up for a whale-watching tour, but I don’t want to.  I want my experience to be “natural,” easy, and free of charge.  This is what I imagine:  I’ll be walking along a stretch of beach and a pod of orcas will just swim by—leaping into the air. I’ll snap a few selfies, with the orcas in the background. That way, I’ll finally have the most inspiring LinkedIn profile picture the world has ever seen.

–Go somewhere—anywhere on a plane during the spring or the summer for vacation.

–Run faster on my treadmill.  For the past few years, I’ve been running at a 9-minute or 10-minute mile pace. This is no longer working for me because I keep stumbling around on my treadmill and messing up my footing. It’s like I’m a fish with my fins cut off and I’m hitting the sides of my fishbowl over and over again. One day, I’ll crack the fishbowl open for sure and there I’ll be, in the garage, flapping around, gasping for air. I couldn’t figure out if the problem was my treadmill, my shoes, my sense of reality/balance, some kind of electrical meteor shower that hovered over my treadmill and messed everything up—or a combination of all of these things. Well, just yesterday, I got brave and hit the “increase speed” button, which is a button with an arrow pointing up.  I had to hit it several times before my feet behaved in a normal, predictable fashion.  So, yeah, I’m going to have to speed up this year.  I have no choice.

–See an orca. Maybe if I run fast enough on my treadmill, I’ll see one this year.

–Add to my collection of glass starfish and virtual racing medals—within reason.  I have to promise myself to not go crazy and cover the house with tons of glass starfish gewgaws. I’ll have to remember to not answer the door covered in medals that I earned from running virtual races on my treadmill.  This will be very hard for me.

Things I Learned While Blogging This Year—Particularly New Things about the Other Members of my Most Beloved Fixin’ Leaks and Leeks Team:

–Nate:  Does not like to be handed a drink while he is taking a shower.  This is no time for a drink.  He believes that broken spiralizers just need some time to relax and perhaps a Tesla motor to get running again. He does not like pudding in his dessert, and, most importantly, his health is just fine.  He just needs to limit his caffeine and I need to quit sounding the “craft alert” alarm so much.

–Alex: Will eat anything I make—and compliment it—even if it is tremendously bad.  Here’s an example: Christmas Eve, I made a spinach dip that I was really excited about—a baked, bubbly, cheesy spinach dip. I couldn’t wait to dig into it . . . but it was awful. I spit it out.

Me: Ugh! The spinach tastes like dirt and the stuff around it is sweet. It’s exactly like eating dirt—but sweet dirt. Ick!

Nate: Yeah, this is awful. Let’s just throw that down the garbage disposal.

And then he ate it! (He did not go back for seconds, though.) In addition to eating bad food that I make—and complimenting it—he will join me in crafts. Alex can also masterfully drive the family car through an Easter parade and then deny that he was accidentally mixed up in an Easter parade—but his dad and I know better. If you find yourself behind a bunch of police cars, fire trucks, and farm equipment—and there are people on either side cheering—you are in a parade.

SeaTac the cat:  Could be giving therapeutic and profitable massages for clients, but he won’t. He has discovered that BBQ chicken and steak are delicacies that he actually wants to eat.  (We only give him a tiny, tiny, tiny amount on special occasions.)  He still loves a good project. He is our “action cat.”

Now, I leave you with some of the Fixin’ Leaks and Leeks Team Members’ favorite lines from 2019 blog posts.  For your convenience and maximum entertainment value, I have pulled these quotes completely out of context. Enjoy!

Pearls of Wisdom from the Fixin’ Leaks and Leeks Blog:

“There’s a lot of living to do before your stuffing falls out.”

“Shoes that are suffocating make groaning noises, and they claw at the closet door.”

“Alex, your mom is not as magical as you thought, but I’ll tell you what is:  a few sprinkles of curry powder and lasagna noodles.  That’s the magic. That’s all the magic you need.”

“Putting together a tapas crawl on a budget takes extreme focus, an ability to guess the prices of food and beverages based on pictures from ‘Google results,’ and flexibility combined with wisdom when veering from the established plan after just one light beer.”

“If there’s anything I can do to help my brother be the first one to study the hazards of face yoga, I’ll do it.”

“Conga, conga, conga to the fridge, my friends. Conga hard.”

“Florida is a tropical, magical, terrifying place filled with alligators that get whipped into a frenzy when there’s a hurricane.”

“Writing makes you hungry and you might develop a wrinkly spot on your neck, but other than that, it’s pretty fun.  Just do it.”

“The Wenatchee, Washington meet is legendary in my eyes—not necessarily because of exciting swimming from participants of all ages—but because a parent from Alex’s swim team fell into the pool once.  He’s my hero. I wish I could fall into the pool.”

“One of the best massages I’ve ever received in my life has been from the cat.”

“Every baptism weekend itinerary for out-of-town guests should include a romp through a casino.”

“When the television wigs out on a Saturday night, the entire family expects a disco ball to fall from the kitchen ceiling, while double-decker fudge brownies, in the shape of elves, jump from the oven.”

“Evil spirit possession, from a macaroni salad, is rare, but it can happen.”

“The first step to loving your ‘badass self’ on vacation is filling up a large suitcase, finding another one in the closet, and stuffing that one full as well.”

“Sounding a craft alert on the Fourth of July goes largely unnoticed.  Safety takes a vacation that day.  Alerts are unnecessary. Safety vests are optional.”

“Snorkeling in a ‘kiddie-lagoon’ in Kauai is no longer harmless fun when someone asks if I’ve seen the barracuda.”

“Reckless and outrageous culinary threats often spew from my mouth after my first Coke in the morning, and today is no different.”

“Clear tape is the ‘fabric of our lives.’”

“’Now that the snow has melted, let’s get OUT of this house! Let’s just go crazy. Really crazy! We’ll just tear up the town—you, me, and Alex.’ And that’s how we ended up on the Boeing Factory Tour.”

“One or two days ahead of a major snowstorm, go to the grocery store with a healthy sense of humor and defeat in mind.”

“A snowstorm is no time to experiment with fiber-enriched products.”

“It’s like I’m in the studio audience of a daytime talk show and every chair I sit on has an air fryer under it and I’m screaming and crying and getting my flat-ironed hair all frizzy. I’m not even sure how I’ve managed to settle myself down long enough to write this. The air fryer is just that unbelievably amazing.”

“It happens to lots of new drivers. You get your license and you, and the car you’re driving, end up in a parade.”

“Bowling like a wild tornado that rips through gutters and puts a hole in the floor is my superpower. But I’ve not used my powers often enough and I’ve felt this gnawing feeling—like I shouldn’t just let myself “get soft”—not when there are so many points that I can help other bowlers on my team lose.”

“Every year I put the same thing on my list: ‘Avoid unnecessarily invasive space aliens,’ and it works out and everything, but I’ve heard that goals should be measurable and planned out in specific time frames. I must try to do better.”

Happy New Year to all of the wonderful, supportive bloggers I’ve met over the years.  May you all have a blessed and prosperous 2020!!!

Your Turn:  What are your goals for this year?