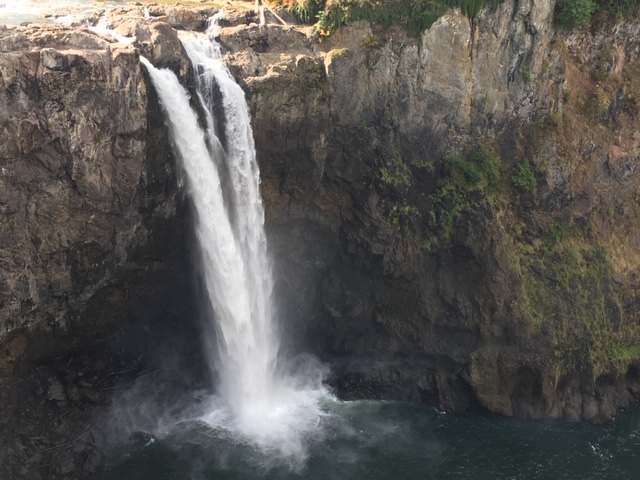 The cat sprung a leak the other night—all over the floor outside of his litter box.  When I discovered the leak, the evidence was still warm and salmon-smelling.  I was thoroughly disgusted. . . until I saw the paw marks. Oh, the horror! SeaTac the cat was spreading the leak all over the house.

“Get the cat!” I shouted to Nate.  “He has stepped in his own urine and is tracking it everywhere—everywhere!”

Is there a drill that could prepare a person for such a thing?  No. No, there is not.  You just kind of make things up as you go along, and that’s what Nate and I did.  And, well, Nate was amazing. If there were ever a cat-wrangling competition at the county fair, I think Nate could win it.  He managed to get SeaTac on his back, and then I came over with wipes and a towel.  SeaTac was traumatized—for two minutes, tops.  After that, he wanted us to entertain him and play with him, but we weren’t playing.  We were busy cleaning out his litter box and trying to figure out what caused the leak.

And then we found it:  little kernels of cat dew that had clumped together and fell through the slats of the scoop I used each day during the week.  I had left them there, figuring to myself, “if the scoop won’t pick them up, I won’t either.”  I thought they were too small to matter. But they do matter. SeaTac the sensitive cat noticed them and heroically hoisted his bits up and over the pea-sized clumps so that he could take a leak—and then step in it and lick himself later.

By the time Nate and I cleaned out the litter box and wiped down the floor with various cleaning products, we had clumps of litter on our bare feet. It was also probable that we had stepped in “eau de SeaTac.” So, we wiped our feet off with towels, and then I headed upstairs to wash my feet off in the shower. A little while later, Nate went to our upstairs bathroom, and I assumed that he also used the shower to wash off his feet.  It was late. We went to bed.

But the nightmare wasn’t over.  It reared its drippy head again around 3 p.m. the next day when Alex got home from school.

Alex tried to shield his mom from the watery horror he’d found, by calling Nate at work to come home.  I was busy typing a story on my computer upstairs, when I heard all kinds of doors opening and shutting. What was Alex doing?

When I got downstairs, a very out of breath Alex said,

“It’s okay, Mom. I’ve handled it for now, and Dad is on his way home from work.”

On the floor, near the kitchen, was a water glass, which was catching drips of water from the ceiling.

My heart sank when I realized that the date night Nate and I had planned would be over.  Nate would be fixing a leak, instead. He’d be crawling through the ceiling with tools and spackle—and finding other problems/leaks (maybe animals?) we didn’t know about.  I’d be alone, at the kitchen table, drinking wine from a bottle and saying, “Are you done yet?”  And then a raccoon would fall from the ceiling, and I’d be getting tested for rabies.

“Alex, you’ve done an amazing job with the water glass, but I think we’ll need a bucket.”

When I came back with the bucket, Alex had more news for me:

“I found the source of the leak! Did you use the soaking tub in the master bathroom?”

What a hilarious question from my son! The romantic, sexy-looking soaking tub in the master bathroom has never been used by Nate or me.  I wipe it down with surface cleaner when I clean the house—just to get the dust off of it, but Nate and I have never been in that tub.  We’ve thought about it. We’ve thought about a romantic, candle-lit, rose-petal moment in a sudsy tub, but this is what would happen:

–The cat would scream and scratch at the door.

–Nate would stumble out of the tub and let the cat into the bathroom.

–The cat would stare at us.

–We’d get creeped out, and romantic tub-time would be over before it even began.

So, no. I’d not used the tub, unless. . . Ah, yes.  Nate used the spray/shower mechanism in the sexy tub to rinse off his feet from the cat incident the night before.  There’s nothing like a sexy tub for a foot-rinsing emergency. Why didn’t I think of that?

By this time, Nate was home, and was tearing apart the sexy tub.  Here’s what happened:  He didn’t turn the valve off hard enough, so the tube that connects to the spraying mechanism/attachment that comes with the sexy tub filled with water, which collected and spread out over the ceiling above our dining room/kitchen.   To fix the problem, all Nate had to do was open some little service door near the toilet, turn up the heat, and wait for the water to dry up.

It actually didn’t take long at all. (In the meantime, I used the toilet near the open service door. The service door is cut into the wall near the toilet, and it’s very small, but it opens up into metal mechanisms and things that read “warning.” Behind this door is a dark, eerie space that’s deeper than I thought it would be.  A weird and creepy feeling came over me—like I was expecting a troll to pop out during my most vulnerable and private moments.  I made sure I mentioned this to Nate, who made it clear that he did not share this same concern.)

So, to conclude, date night was saved.  The cat is leak free and so is our kitchen.  Here are my takeaways:

–The slightest specks of clumpy litter raise alarms for cats. These clumps can cause cat leaks.

–Sexy tubs are great for rinsing dirty feet. Just make sure the valves are turned off when you are finished. (Righty-tighty, lefty-loosey).

–Service doors near the toilet may be dark and creepy, but they typically don’t contain trolls.  Avoid having to open these doors by observing the two takeaways mentioned above.

Your Turn:  Did you encounter any last-minute problems you had to fix in your house or apartment this week?  Discuss below.

38 thoughts on “A Leaky Cat Leads to Leaks”