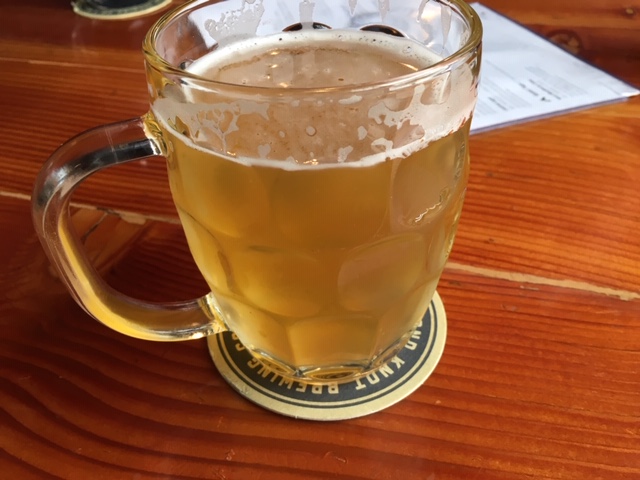 Restaurant restlessness and “where’s-my-margarita-already-it’s-my-birthday” whining can be effectively shut down with birthday-themed activity booklets. I created such a booklet just in time for a “Here’s Something Nifty: Nate turns 50” family birthday party at a Mexican restaurant.   I didn’t want any incidents to erupt if there was a long pause between the time that we ordered and when the food would arrive. Celebrating a birthday in a restaurant during coronavirus times could be incredibly boring and time-consuming according to restaurant reviews I’ve read recently, such as this one right here:

“The server who waited on us came promptly to the table and took our drink orders, but then it took 10 minutes for the drinks to actually arrive. She apologized by saying she was ‘cleaning so many things because it’s the law now,’ but I’m getting tired of these kinds of excuses.—Grumpy Gavin, Local Expert.”

After reading this review, I thought, “Well, Grumpy Gavin, grab an adult coloring book and a few markers or crayons.”

And then, I really got to thinking: Food should arrive later now, if our servers are busy wiping off surfaces (thank goodness) and keeping us safe, so why not create some of those “old timey” activity booklets we used to get as kids in restaurants? How hard would it be for even someone like Grumpy Gavin to create one of these and remain entertained for an entire ten minutes?

Not at all. It’s not really that difficult at all.  Here are a few snapshots of the activity booklet I made for Nate’s birthday—to keep everyone calm and happy between margaritas and the Oaxaca grande sampler plate: 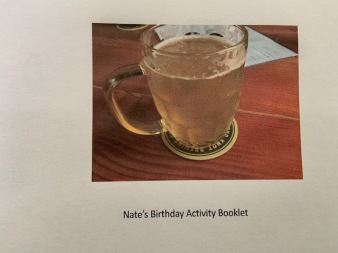 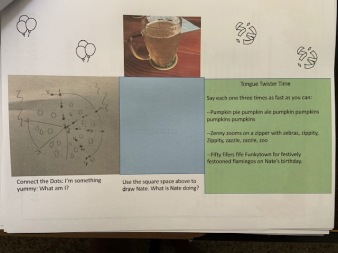 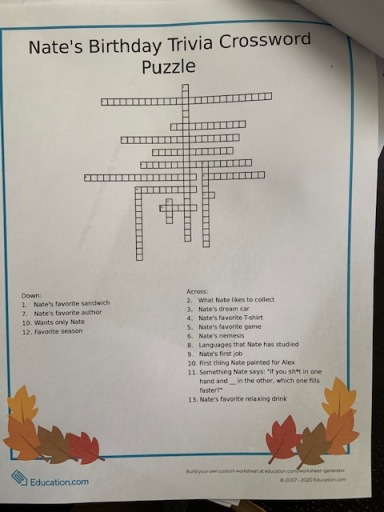 I created the whole booklet on Word/PowerPoint, and it’s all neatly held together by one single staple. (There are free websites that will create/generate crossword puzzles. I used Education.com’s site.)  I probably spent about an hour thinking of things to put into the booklet. At the table, we spent about ten minutes coming up with answers and drawings. Here’s a look at our work: 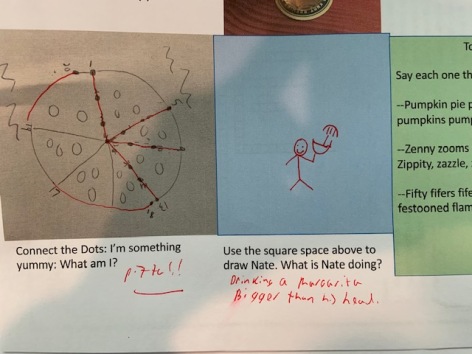 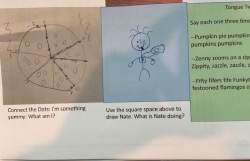 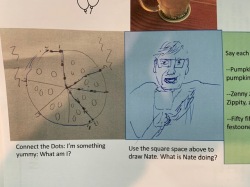 As you can see, Nate and Alex have some problems with following directions. They didn’t write down what the connect-the-dots picture was (a pizza)—or what Nate is doing in the drawings box captioned: “Draw Nate. What is he doing?” One can only guess.  We did have a lot of fun saying the tongue twisters out loud. (In case you can’t read them in the photo above, they are: A) Pumpkin pie pumpkin ale pumpkin, pumpkins, pumpkins, pumpkins; B) Zenny zooms on a zipper with zebras, zippity, zippity, zazzle, zazzle, zoo; C) Fifty fifers fife Funkytown for festively festooned flamingos on Nate’s birthday.)  To take this activity a step further, you might have the birthday boy/girl spend the duration of the dinner memorizing the tongue twisters. Then, they can stand up and recite them to the table in exchange for a special gift (which is really just the gift you already bought and wrapped, but after a few margaritas, the birthday boy/girl might not catch on).

All in all, the activity booklet was quite the hit with Nate and Alex, but Nate was a little skeptical at first because I had hidden our booklets in a manila folder of sorts. Naturally, when I said, “Here’s something fun I have planned for everyone!” Nate thought that I was pulling out a manuscript for a short story that I was going to have him read on his birthday at a restaurant. To be clear, I would never make Nate read one of my horror stories on his birthday—but I might include a really short story in an activity booklet. Why didn’t I think of that earlier?

Maybe it might go something like this:  In a dark, cantina-themed restaurante in suburbia, Grumpy Gavin orders a drink, but he’s quite impatient, so his server pulls out a haunted activity booklet to keep him entertained. Under the booklet’s magic charms, he stays a long time—ordering more food and drinks. The connect-the-dots section has him stumped. “I’m something yummy: What am I?” he says, over and over again out loud—as he traces the dots with a red pen. The answer, upside-down, at the bottom of the booklet reads “pizza,” but Grumpy Gavin is not a cheater or a quitter. The server is surprised, at the end of her shift, to find an empty booth—with Grumpy Gavin’s wallet face up and open on the table. Grumpy Gavin is nowhere in sight. She, and the staff, look everywhere, but they can’t find him. The server shrugs her shoulders and collects the money and the haunted booklet. When she turns the booklet over, she notices that the connect-the-dots pizza now has a knife and fork, and something that kind of looks vaguely like Grumpy Gavin in cartoon form is sprawled out on a table.  Grumpy Gavin’s body is missing in spots. The parts that are missing are now dots with spaces in between. The caption/question at the end is now a thought bubble over Grumpy Gavin’s head.  It reads: “I’m something yummy. What am I?”

–Nate’s office chair and table have arrived! He has the best view in the house: 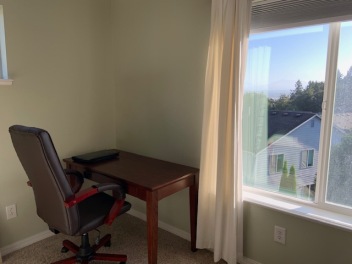 –And here’s the pie he requested for his birthday. I cannot take credit. Alex and I made the filling, and Nate did the crust/made it look pretty: 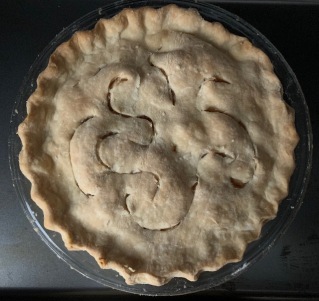 Your Turn: How has the pandemic changed the way you celebrate birthdays?