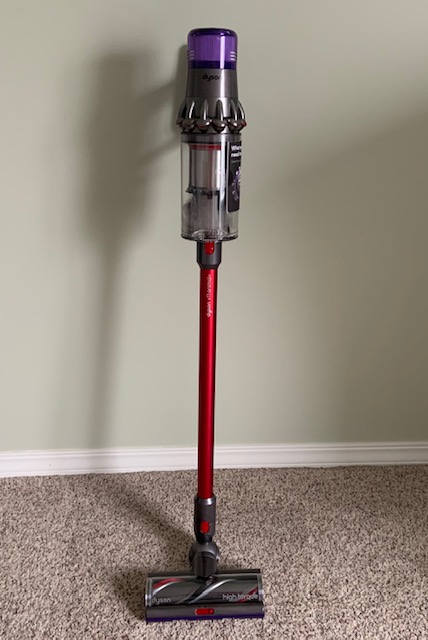 High-pitched noises, followed by a smoky plastic-smelling haze, were the ominous signs that the vacuum cleaner was trying to kill the decorative throw rug in the living room. After all of these years, it looked like the vacuum cleaner might win, especially if I instructed Alex (who was vacuuming at the time) to just keep going and ignore the terrifying noises and smells because “Hey, it’s old. Sometimes it just does that.”

“I don’t know, Mom,” Alex said. “I think the vacuum cleaner is burning the rug. I think we should get Dad.”

But Nate was already in the room before Alex could say, “Dad.”

“Everyone, stop!” he said. Then, he unplugged the vacuum cleaner and flipped it over, touching the underside where the brushes are—cursing and screaming at how hot the entire appliance was.

“This could definitely catch on fire,” he said.

And then, Nate said something that made my skin crawl: “It’s like it’s trying to eat its own bristles and melt them at the same time.”

In other words, the vacuum cleaner was on a suicide mission: That decorative throw rug has been its nemesis for many, many years, and it was going to take both of them out in a vicious “see you in hell” moment.

How does this happen? In the interest of science, engineering, and safety, I’ve created a highly technical drawing that might be useful to someone. Here it is:

As you can see, vacuum cleaners are dangerous. Carpets are defenseless. Everything will catch on fire eventually. Thankfully, there are two ways to solve this problem: 1) Never vacuum again or 2) Get a new vacuum cleaner.

We opted to get a new vacuum cleaner—one that sounds pretty dangerous: Dyson Animal 11. I’m not sure what the 11 stands for, but maybe there are 11 different types of animals in there that could take on troublesome foes like carpet and hardwood floors. It’s supposed to have “twice the suction of any other cordless vacuum.” (Here’s the website: DysonV11)

Nate was the first to try it out, but he wasn’t convinced. “It’s really hard to push,” he said—especially on the decorative throw rug in the living room.”

“It is a little harder to use on this rug, but I can do it, and I’m actually enjoying vacuuming again.”

“But why is it so hard to push on this carpet?” Nate asked.

Nate offered me the handle of the Dyson Animal 11, and I took it. I told him that I love him and if anything happened to me, to tell Alex that I fought hard, with an army of like the 11 most lightweight, powerful carpet-sucking animals technology could ever invent.

Your Turn: Are there any appliances you have had to replace lately? What do you look for when shopping for appliances?