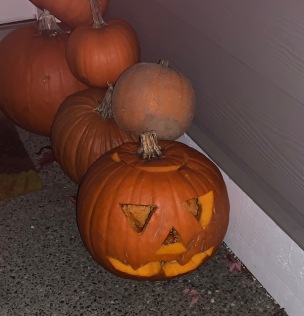 When the salad tongs go missing, and the craft alarm rings, grab a pumpkin, a fistful of candy, and hitch up your Halloween pants. The full moon is rising, Vincent Price is whispering in your ear, and the Fixin’ Leaks and Leeks Team has lost its collective mind. Someone else in the house, besides me, rang the craft alarm. I was about to blame the tomfoolery on the homicidal pumpkin décor of which I wrote last week, but Alex quickly confessed to the “crime,” which wasn’t a crime at all. He just needed a shiny red guitar to go with his Kurt Cobain costume, which cost all of the price of a wig—a gorgeous, to-die-for-straight-as-a-board-waxy-platinum-blond-polyester number. It worked well as an amazing contrast to Alex’s scruff, which he has been growing out in dark shades of strong Seattle coffee.

In any case, Alex started his project at around 4:30 p.m. By 5 p.m. (or 5:30), I wanted to eat a quick dinner, put on a pair of cat ears, don a mask and gloves, go outside on the front porch, and use long/Clorox disinfected salad tongs to throw Milky Ways at children who had better be wearing masks and staying far away from me. Also, Nate was supposed to carve a pumpkin, and Alex wanted in on that too.

At around 5 p.m., the craft alarm was still going off. I ate dinner anyway and marveled at how Alex was able to draw, on cardboard—freehand—an electric guitar. Eventually, he did ask for my help, once he cut the guitar out. I was supposed to:

–Make two small balls out of the aluminum foil and attach them with tape, once Alex got the wrapping paper onto the guitar. (I could do that!)

–Find black construction paper (I knew where it was!)

–Use a glue stick to help attach some of the black construction paper onto the guitar. (Did it! (Almost glued it to the dining room table, though, so . . . don’t tell Nate.))

–Cut yarn into guitar strings. (Yes, I could do that!)

–Hold the strings while he taped them down with duct tape. (No problem!)

Nate had already gutted a pumpkin and now, Alex could start to carve out the face. I ripped strings from the pumpkin’s nostrils. It felt good. It felt really good to do that to at least one of the pumpkins that I just knew had been watching me since at least October 22nd.

Finally, at around 6 p.m., Alex and I could go outside with our tongs and throw candy at children. But here—here’s where it got really spooky: we only came back with one pair of tongs. Who took the other pair? Who? 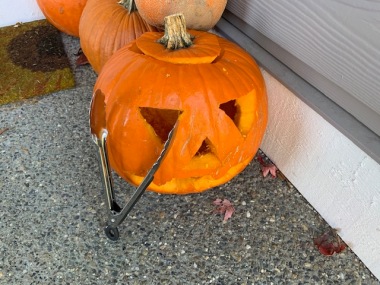 Your Turn: Did you dress up for Halloween, even if you didn’t go anywhere? Have you worn a costume “just because” since the pandemic started? If so, what have you dressed up as?