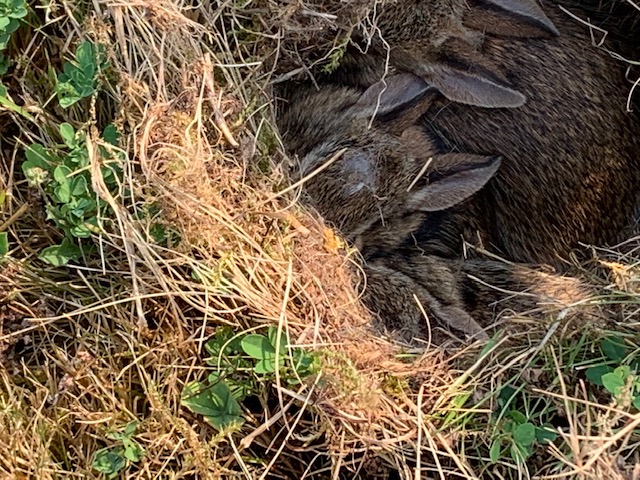 Today, the craft alarm sounded like a grinding lawnmower, chomping along, growing with maddening intensity—as if it were possessed—until the sweaty, yet determined driver of the machine (Nate), suddenly stopped. He picked up a tuft of dirt and grass in the backyard, inspected it, and put it right back where he found it. Then, he motioned for me to come outside.

After struggling with the sliding glass door and a pair of wayward flip-flops, I trudged out onto the lawn and watched Nate remove the tuft—and huddled underneath were three tiny bunnies, nestled together for dear life.

And, the cuteness—well, the cuteness of it all nearly killed me. I hadn’t seen anything so precious since the time the cat crawled into a box with all of its toys and snuggled them under his rump, his long tail smacking the cardboard lid with delight.

“Oh, they are the sweetest things I’ve ever seen!” I said, while clutching my heart and searching the backyard for the nearest ventilator—as if we just had one lying around.

Nate smiled and went on with his yard work, but I had questions—such as this one:

“What do we do with the bunnies?”

“Nothing,” Nate said. “They’re getting old enough to get out of their hole there and look for food.”

Probably our food. We have tomatoes, basil, and jalapeño peppers growing nearby, so once they’re out, we’ll know. They’ll leave a spicy salsa puree throughout the neighborhood, and that’s how we’ll know that they’re our bunnies and no one else’s.

However, I don’t want to accidentally drive any spikes through the bunny hole or place a hot tub over them or anything, so I thought it would be wise to stick a little reminder outside to help me keep sharp things and such in check. I mean, I might lose my mind and drive a backhoe around or something—or pick one up at Lowe’s thinking, “was I supposed to get a backhoe today? I can’t remember. Better get one just in case.”

So, I made a sign. It took about five minutes—no trouble at all. Here’s what I did: 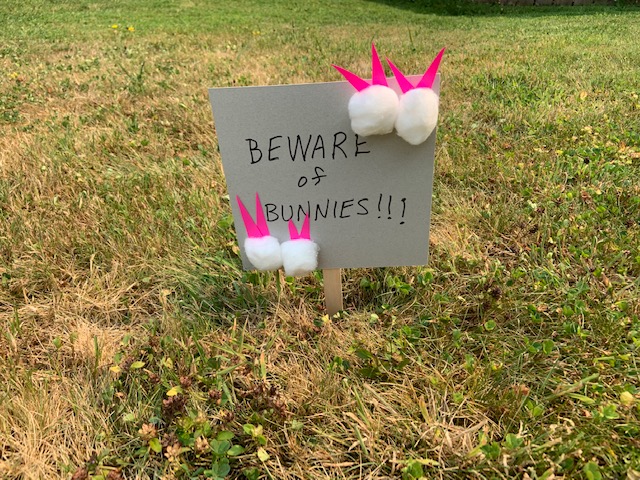 –I found some random cardboard at the bottom of my office desk drawer.

–In Alex’s room, I found craft wooden sticks. I took one without telling him. I hope he doesn’t read this post. Also, I borrowed some Elmer’s glue.

–In one of the filing cabinets downstairs, I found some painter’s tape and taped the craft wooden stick to the back of the cardboard.

–In a drawer in the “crafting nook” in the bedroom, I found scissors, markers, and a roll of double-stick tape that was on its last legs.

–In the bathroom, under the sink, I found cotton balls.

–In a drawer in the walk-in closet, I found some pink paper.

–Once I’d gathered all of the things, I found Nate, so that he could write “Beware of Bunnies” on the sign. (He has better handwriting than I do.)

–Then, I used the cotton balls as heads for the bunnies, and I cut out pink ears for the tops of the heads.

–I glued the ears to the backs of the “heads” with the Elmer’s glue.

–I had just enough tape to stick the heads onto the sign.

–Finally, I planted the sign into the soil, but far away from the bunny hole; otherwise, I’d be driving a stake through one unfortunate bunny’s heart, and there’s no need for that—unless they’re vampire bunnies.

I think the sign will last just long enough for me to develop the habit of not drilling for oil in the backyard—at least not in that spot.

Your Turn: What’s something you’ve seen that has made your heart melt?