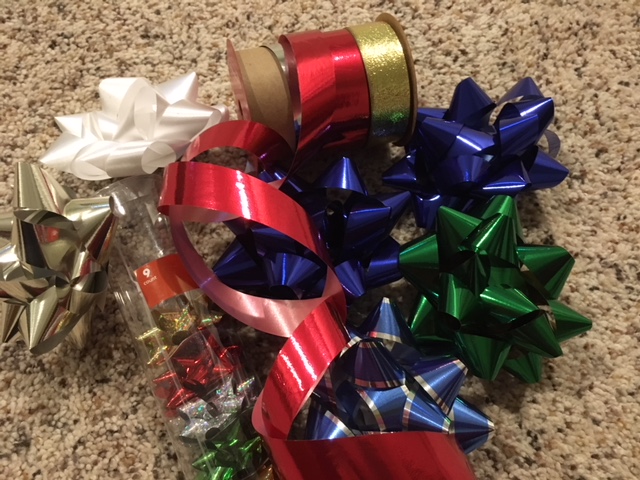 Eggshell carcasses and other culinary casualties dressed as menacing presents harassed me in my nightmares all last week as I charged my way to Christmas. I almost made a stop long enough to board the Good Ship Seasick, but I pulled myself together in a stellar display of “crazy holiday mom” who attempts to impress innocent bystanders with DIY fits and feats of epic proportions. Here’s how it all went down:

Me: There are only three of us! How could we have worn 40 pairs of underpants in 24 hours?

Nate: We did a lot of walking in Victoria.

Me: Yes. Walking. That explains everything.

9 a.m. Make an extra dish for the brunch: a breakfast casserole recipe a la Betty Crocker Cookbook: 5 eggs beaten with a dash of salt and pepper + 1 cup of milk. Layer a casserole dish with 3 cups of frozen shredded hash brown potatoes, chopped onion, green bell pepper, 8 slices of crisp crumbled bacon, and at least a cup and a half of shredded cheddar cheese. Pour the egg mixture over and bake at 350 for 30-35 minutes. Then, I throw it and the coffee cake at Nate with these instructions:

Me: Okay, here’s the coffee cake and the egg dish. Don’t tell anyone I made it.

Me: These are new recipes. I’ve not tried them before. If they taste bad I don’t want anyone to know I made them.

Nate: But they’ll see me placing these dishes on the table.

Me: Tell them someone else made them and then just leave—run—get out fast.

11 a.m.: Everything came out fine, but it’s confirmed: The ONE gift Alex actually wants for Christmas is not coming. A major mom meltdown ensues, but not in front of the swim team.

A) Snow balls from my mother’s recipe book from Mexico where she studied Spanish: 1 cup of butter, ½ cup of powdered sugar—cream the two together. Add a teaspoon of vanilla, 2 ¼ cups of sifted flour, and a dash of salt. Combine everything and place in plastic wrap in the refrigerator for an hour or so. Form the mixture into balls and bake at 400 for 14 minutes. Roll them in powdered sugar.

B) Half a batch of rum balls from Nate’s mom’s cookbooks: ¾ box of vanilla wafers, crushed;1 cup of chopped pecans, 1 cup of raisins—but I didn’t have any, so I used chocolate chips; 1 tablespoon of cocoa powder; ½ cup of powdered sugar; 3 oz of rum; ¼-1/3 cup of corn syrup. Mix everything together and form into balls. Roll them in powdered sugar and powdered coffee.

C) Festive holiday chip cookies from the Betty Crocker Cookbook, but I add 1 tsp of vanilla and leave out the walnuts.

3 p.m. I can finally rest my feet for a few hours before dinner.

7 p.m. Natalie McMaster and her children are fiddling and dancing on TV. Oh, how I wish to dance like that! Scottish step dancing—that’s definitely on my bucket list—and I must do it at the Red Shoe Pub. I get up and dance. I actually believe I’m good. I believe I am awesome.

8 p.m. My feet take quite a pounding from the Scottish step dancing attempts. Nate rubs my feet for me. I’m a lucky lady.

–Start laundry and a lasagna recipe from the Internet. It actually works! Don’t boil the noodles!

–Poke around in my closet for something to wear to Christmas Eve Mass, where I’ll sit, and sit, and sit— and dream about the lasagna and beer waiting for me at home.

—10 p.m.—go to bed with visions of sugarplums—and laundry, lasagna, and swim team brunch items—Scottish step dancing in my head.

Epilogue:  A rare Seattle snow fell and we woke up to a white Christmas. Alex didn’t even miss the present he requested and we made it out to see the ocean. All is well.  And quiet. Finally.  (Except for SeaTac the cat.  He’s pretty loud–and the first one up on Christmas morning.)  I wish you and yours a festive and Merry Christmas/holiday season–and a very, very Happy New Year!!!!

23 thoughts on “DIY Fits and Feats of Christmas: Wrap-Up (With Recipes and Links)”