A bang up, rocking New Year’s Eve family blow out must include a “hold-onto-the-seat-of-your-pants” line up of high-octane fun. Reckless snoozing runs rampant on the eve before the new year and we wanted to do our part to avoid going down this slippery slope.  Since it was just the three of us—and the cat—we had to pull together in unprecedented family unity to really kick 2017’s butt and get all up in 2018’s face. Here’s how it went down—family style:

4:30 p.m.-7:30 p.m.: Make and Eat Mediterranean Themed Appetizers: Just minutes before getting started in the kitchen, my brother called and asked what my plans were for staying up until midnight. I told him I was creating a Mediterranean style menu that would begin with a flavorful lentil soup. He burst into laughter and said, “Put the police on speed dial!”

In an effort to show him that making lentil soup is outrageous, crazy fun, I sent him a picture of me making the soup. In it, I—and the soup— are rocking it. I’m even wearing my fuzzy, sparkly slippers—and I’m still in my church clothes from earlier in the day, so yeah. That’s how fun is done, my baby brother.

Lentil soup: 1 cup of dried lentils, ½ cup of diced onion, ¼ cup of diced carrots, ¼ cup of diced celery, 1 tsp. of chopped garlic, 1 tablespoon of olive oil, about four cups of chicken broth—add more if it boils down during cooking, salt to taste, ½ of a 14.5 ounce can of diced tomatoes, a tablespoon or two of lemon juice, 1 bay leaf, dried oregano and basil to taste. Ground cumin to taste. Cook the vegetables and garlic in the olive oil, add the rest of the ingredients and bring the mixture to a boil. Reduce the heat and let simmer for one hour.

Mediterranean Sandwich Braids: Make the pizza dough recipe from this Fixin’ Leaks and Leeks blog (Click Here.) Then, divide the dough in half and roll it into oval shapes.   Down the middle third, place strips of jarred roasted red peppers, fresh tomato slices, a sprinkling of dried oregano, and a little Italian dressing. Top with provolone or mozzarella cheese and add Genoa Salami if you want a meat version. If you want a vegetarian version, you can leave the salami out. Cut the outer third pieces of the dough into strips, as shown in the following blog post from this Fixin’ Leaks and Leeks post (Click Here.) Top each dough braid with a sprinkling of water and sea salt. Bake at 450 for 15 minutes.

Spiced Meatballs: 1 pound of ground beef, lean; 1 tsp. of chopped garlic; ¼ cup of diced onion; 1 egg; 1 slice of bread; ½ tsp. salt; ¼ cup of milk; 1 tsp. ground cumin; 1 tsp. allspice, 1 tsp. cloves; 1 tsp. cinnamon. Soak the bread in the milk and squeeze the milk from the bread. Add it to the ground beef—along with the egg. Add all of the other ingredients to the ground beef and mix with your hands. Form into balls and bake at 400 for around 20 minutes.   Sauce/topping: Mix ½ cup of sour cream with a few tablespoons of milk to thin it out. Top the meatballs with the sauce and sprinkle cumin on top.

7:30 p.m.-8:30 p.m. Discuss the Family Budget. Nate is a CPA and swears that anybody in the world can and should set up a family budget, but I’m always amazed at the amount of work he puts into ours. I’m planning on asking him to list some “easy” steps for starting a family budget, which I could share on this blog, but for the moment, we just boil the budget down to the fun stuff:

We were somehow able to increase our net worth, despite the fact that we are down to a single income, we lost a lot of money when we sold our house in Ohio, and with only one teenage boy, we spend a LOT on groceries. We still manage to save what we can and, since the state of Washington is so new to us, every weekend is a vacation, so we don’t spend a lot on trips and we limit our eating out. Yay budgets!

We closed out 2017’s budget by deciding on charities we can donate to with the money we’ve set aside for giving.

We need to start putting a certain quantity of money aside each year for funerals and/or visits to relatives who are sick. These are of course morbid thoughts for a new year, but we do have to think about them. And there’s no better time to face them head on than after a full stomach and a beer or two.

I’ve decided that it’s time to up my clothes budget a little bit for this year. “Party like it’s 1999” is gone. Over. Done. But no one told me. I’m still wearing the same four outfits from that party. Stains and all. I deserve a change. So do Nate and Alex.

We’re going to increase the “business expense” budget so that I can start a writing/editing/tutoring business in English and Spanish.

We’ve saved up for a new dishwasher and a new washer/dryer, so our job this year is to go out and buy these items before the ones we have break.

We want/need the following items: 1) Landscaping; 2) Exterior House Painting; 3) a Hot Tub. We only have enough money for maybe the landscaping this year. After that, if there’s money left over, we need the exterior of the house painted next. I’m sad that the hot tub won’t happen this year, but if my business takes off, then maybe we can add it in.

Vacation. Even though we take short trips we can drive to these days, we’re still hoping we might be able to catch a cheap flight to Florida to visit family and catch some rays. We’ve not seen Portland, Oregon yet, and there’s always the hope we can see Tofino. Our budget might not allow for all of these trips, but we’ll see what we can do with what we have.

9 p.m.-10 p.m. Walk Around the Neighborhood While Shouting, Woohoo! We’re Taking a Walk in the Cold. Look at Us! This event is actually part of our Neighborhood Watch New Year’s Resolution. Look out, unsavory characters!

Last year, we didn’t write any predictions for one another, but this year, we wrote three predictions for each family member and sealed them in a plastic bag so that we can open them next year and see if they came true. Here’s a summary of some of those predictions:

–Save the county some money or help the county avoid disaster in some way financially.

–Discover the truth about the mystical, yet magical realm of Costco. (That one was Alex’s prediction for Nate. Not bad at all!)

–Make even more friends this year.

–Continue to decrease his swim times and either get a PNS time or come close to it.

–Not be abducted or probed by aliens. (Thanks, Nate.)

Nate and Alex’s predictions for Cecilia, who will:

–Not be abducted or probed by aliens. (Thanks, Nate.)

–See her first Orca in the wild.

10:30 p.m.-11 p.m. Karaoke. This is the part the cat dreads, but the fireworks drown out our voices. The fireworks are far worse and the cat spends the rest of New Year’s Eve hiding under our bed.

11 p.m.-11:50 p.m. Watch Saturday Night Live Re-Runs and Drink a Glass of Champagne. If necessary, we blow horns in each other’s faces to stay awake.

Happy New Year from Nate, Cecilia, Alex, and SeaTac the cat! I will now leave you with a montage of our Wii Dance Party photos:  (Photos by Nate, Cecilia, and Alex Kennedy.) 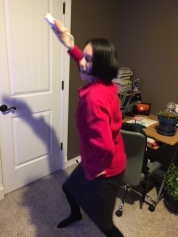 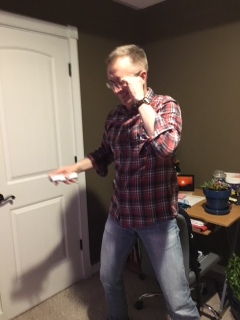 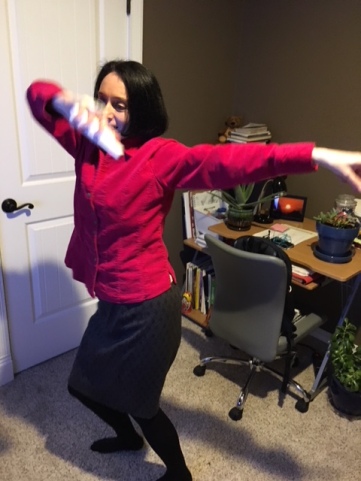 Your Turn: How do you typically spend New Year’s Eve/Day and/or what are your hopes for 2018?