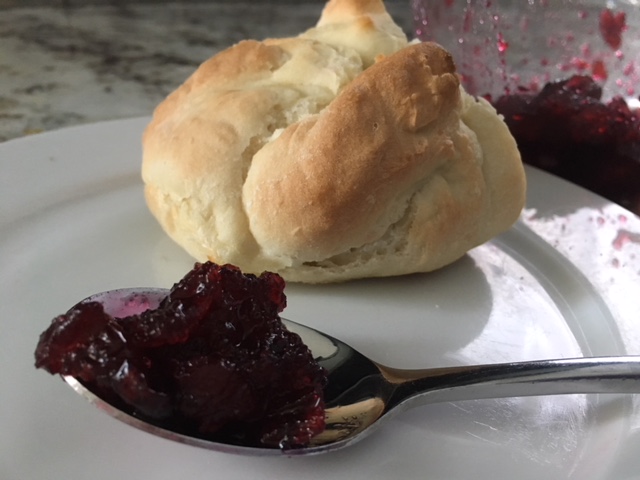 After knocking the cranberries out of my stuffing while trying to imitate the Rockettes in the Macy’s Parade, I decided to just calm down and put out some appetizers.

“It’s officially Thanksgiving when I’ve pulled my wishbone trying to do a kick line, so yeah, I think we can get started with some apps at least.”

Nate calmly nodded and agreed that maybe I would be better off around stoves and ovens and fire. The cat also finally poked his head out from behind the couch, looked around, and decided he was finally safe from my antics, which included the following: kicking my legs up in the air and yelling, “Whoo!! Whoo!! Nate, watch! Alex, Mom’s still got it! Ouch! No, I don’t! I’m done!”

“Do you need any help, Mom?” Alex asked—not because he was worried about anything I may or may not have pulled, but because he wanted to snack on the items I would put out on the table. Since he’d just finished at least 10 hours of sleeping and a hearty breakfast, he’d naturally be famished.

So, I put Alex to work on a cracker and spread plate, which miraculously made it to the table without any teeth marks in the cheese ball.   Next, there was a slight moment of panic when I couldn’t find the carrots and celery. I assumed that Nate thought they were for the turkey, but I found them and set them on the table, where they remained for at least two hours because no one eats carrots and celery on Thanksgiving Day, unless they are drowned in gravy. Alex then volunteered to pop some popcorn in honor of the Charlie Brown Thanksgiving Special. Finally, I seriously considered serving the cranberry sauce and bread as appetizers. Here are a few reasons why:

1) I once tried to slather a nice thick slice of turkey with cranberry sauce and I thought to myself, “This isn’t a biscuit! It’s turkey! Ick! Cranberry sauce should go on bread or toast.”

2) I typically serve mashed potatoes and stuffing on Thanksgiving Day. Serving homemade bread in addition to potatoes and stuffing is just overkill, but I really, really like bread, so maybe I could serve it first—just like when we go to fancy restaurants and fill up on bread before our pricey steaks arrive. Then, we’re too full to eat them, but we still order dessert, and when the bill comes, we learn the lesson of the Reckless Rabbit who had to tighten his budget because he loosened his belt. (The Reckless Rabbit is a story/moral that has yet to be told and perhaps illustrated—or readers could just imagine the illustrations, I suppose. Who knows? Maybe it exists somewhere on the Internet. I haven’t checked yet.)

In any case, the cranberry sauce did not make it to the appetizer table, but next year it will. I love to put the sauce on my bread and I’m including the recipe I use from the Cooking Light Magazine (2003) below. Nate and Alex are traditionalists though. They like the mixture of sweet cranberry sauce and savory turkey. Lots of people do, which is why I can’t figure out why carnivals don’t sell cranberry candy apple coated turkey legs. If they don’t, maybe I’ll find a way to make it at home for Nate and Alex. I’ll just have to start practicing now and figuring out how I’ll work this new recipe in around the Macy’s Parade and a possible emergency room visit that will end with a lecture about the Wayward Wallaby Who Wouldn’t Warm-Up.

–Combine all of the ingredients in a medium saucepan and bring them to a boil. The directions say to reduce the heat and let them simmer for about nine minutes—or until all of the cranberries pop. I let them simmer a lot longer because I like the sauce to be thicker.

Your Turn: During festive holidays, when several foods are served all at once, which one do you like to eat first?