Sounding a craft alert on the Fourth of July in my neighborhood adds very little noise or sense of “alarm,” amid the loud, violent screams of fireworks exploding in the air, starting at 4 p.m. July 3rd.  However, I thought I’d try to sound the alarm anyway, because by noon, my nerves were sufficiently rattled.

“I’m sounding the craft alert,” I told Nate.  “The whole neighborhood had better pack up and leave if they want to remain safe.”

“I don’t think they care,” he replied.

As fireworks pelted our garage and front door, I realized that Nate was right. A craft that involved pasta noodles and large amounts of blue tape—no matter how sticky that tape might be—was no match for the many Roman Candles, missiles and rockets, and aerial repeaters “rehearsing” for their big, blazing moment that would send drunk neighbors running through the yards yelling, “Wooohoooo!!!!”  However, I felt that making a craft would at least temporarily take my mind off the horrific images I had of my house going up in flames.  And, I must say, that for at least 30-40 minutes, I hardly noticed the intermittent popping sounds outside my window.  So, if you find yourself in a fireworks-crazy neighborhood next year, you too can make this “Baby, You’re a Firework!” Wreath to temporarily settle your nerves. I’ll walk you through the steps:

Step 1: The Back Story: A week or so ago, Nate and I took a very pleasant walk through the neighborhood. Nate stopped to gaze at a house along the way and he said, “Wow! Look at that giant hosta!”  Except I heard: “Look at that giant pasta!” And my eyes were drawn to a wreath on the door that I thought was made of pasta. But it wasn’t. It was made of other things, but I got to wondering: Could I make a wreath of giant pasta?  I figured, “Why not?”  I had leftover “giant” pasta in my pantry that was getting old.  The leftover lasagna noodles from Christmas Eve dinner were just begging to be made into a craft. . . .

Step 2:  Begin to Imagine and Paint:  Logistics are not my specialty.  For that, I turn to Nate and Alex.  Nate showed me how the lasagna noodles could be fanned out to create a wreath. He used about nine of the noodles, so I decided that I should paint three of them red and three of them blue. The other three could be left plain.   I just painted one side of the pasta noodles and left them to dry while I did an exercise video on YouTube.  (We, here at the Fixin’ Leaks and Leeks Team don’t see the sense in painting both sides of lasagna noodles.)

Step 3:  Try to Remember How Nate Configured the Wreath and the Pasta Noodles:  I couldn’t wait to start putting my wreath together, but I couldn’t remember what Nate did to make the lasagna noodles look like a wreath.  However, Nate was unable to help me because he was icing his shoulder. He spent the morning mowing the lawn, watering it, filling up buckets with water for both the front and the back side of the house, and trying to kill wasps, which were building nests under our roof. I’m glad Nate was able to get most of the wasps because, I suppose they could serve as fodder for fireworks, and we don’t need anymore fodder.  A house is fodder enough.   So, I got Alex to help me out.  He did a great job!

Step 4:  Try to Figure out How to Hold All of the Pasta Together:  Alex and I tried super glue and tape, but lasagna noodles have ridges, so they don’t create a flat surface for sticking to one another. That’s when Alex found the blue painter’s tape and tied/taped pieces of the lasagna noodles together. Then, the whole middle ring was fastened together with blue tape. 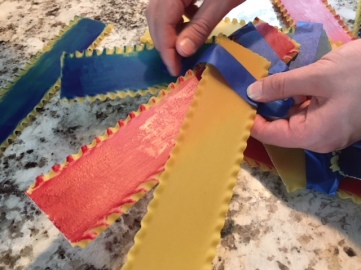 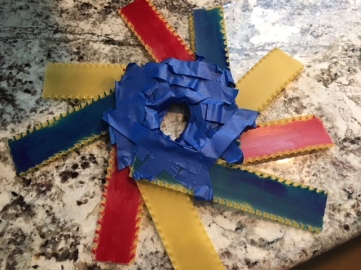 Blue tape around the middle of the wreath. Photo by Cecilia Kennedy

Step 5:  Add Sparkle to Distract the Eye:  We ended up with a big blue ring of tape in the middle that, from far away, looked kind of interesting, but up close, it looked like blue tape haphazardly stuck around lasagna noodles that had been painted blue and red.

“This looks okay,” I said. “But it could look better.”

“I know!” Alex said. “We need something sparkly.”

“Exactly,” I said, “to serve as a distraction.”

In my crafts supplies “super nook” upstairs, I found some sparkly Fourth of July beads, which we stuck to the blue tape.  It looked much better then.  Much better.

Important Reminders if You Make this Craft:

–Don’t hang the wreath on the door. It might last for a little while, but the whole thing will come crashing down—especially on the Fourth of July, despite a neighbor’s best efforts to don a glow-in-the-dark safety vest in a spectacular show of safety. Then, while wearing the safety vest, he will light fireworks in the street and smoke a cigarette at the same time.  Decorative wreaths and garden gnomes don’t stand a chance.

–Sounding a craft alert on the Fourth of July goes largely unnoticed.  Safety takes a vacation that day.  Alerts are unnecessary. Safety vests are optional.

Your Turn:  What do you like to do with leftover pasta?  Have you ever worn a safety vest during a celebration?