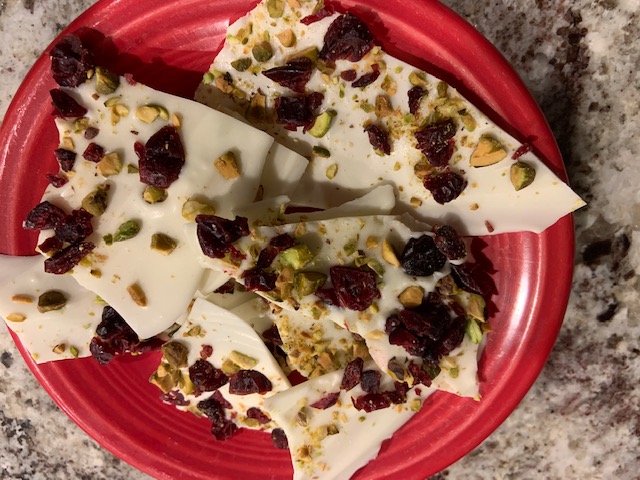 The television set wigged out on me Saturday night, and as we all know, when that happens, the entire family expects a disco ball to fall from the kitchen ceiling, while double-decker fudge brownies, in the shape of elves, jump from the oven. These elves should be festooned with noisemakers, dance around, and throw up confetti when you bite into them.  However, after timing a swim meet all day, I didn’t want to make or clean up elf confetti vomit. I was tired.  Nate knew how tired I was because he was right there with me, timing that swim meet—standing knee deep in a mosh pit of wet kids while trying our best to not just toss our timers into the pool and run like hell for the bar across the street, while singing, “It’s the most wonderful time for a beer.”

No, I didn’t have it in me to make holiday themed cookies, and I’m pretty sure Nate didn’t want to have to watch a disaster-in-the-making play out—not while the television set was on the fritz.  However, I did have:  a microwave oven, some white chocolate chips, pistachios, and dried cranberries. So, I decided I’d let the microwave and those chips do all of the work.  And, with very little time or effort, I made pistachio-cranberry white chocolate bark.

Now, you might be wondering, “Who made the first chocolate bark?”  There’s a whole history of the “mendiant (mendicant) chocolates” from France, here on this link.  Apparently, in France around Christmas time, elegant disks of chocolate are sparsely, but elegantly decorated with choice dried fruits and nuts to represent various mendicant orders of monks.  However, the Fixin’ Leaks and Leeks Team tries really hard to dig deep into the history of things and “discover” new histories that suddenly appear, through imagination, and document them for the first time on this blog.  Here’s that story now:

Way back in the old timey times, there was a lovely maiden named Herangula who made baked treats in a castle, but the king that lived there, was a drunk tyrant who harassed the maiden on a daily basis.

“Oh, my! How well you stir that dough,” he’d say, with a creepy, lusty smile.

“You barketh up the wrong tree,” she told the king.

“If only I were a tree.  I’d let you climb up and swing upon my branches.” Then, the king twirled his long handlebar mustache and laughed maniacally.

“Ugh! Disgusting!” she yelled.  She was so angry, she threw an entire pot of warm chocolate at the king, who ran for the door while laughing.  The hot confection missed the king, spilling onto the floor.  Since the chocolate was hardening on the stone ground, Herangula knew she needed to mop it up quickly. And that’s when Prince SuperHunky, who happened to be shirtless and riding by on a Budweiser Clydesdale horse, spotted Herangula.  He had heard, from afar, of her baking prowess, and he had ridden out just to see her.

“Lovely Herangula,” he said. “I heard what the king said and me thinks he is utterly disturbed and without bounds.  I weepeth that his tainted words reach such sweet ears.”

Herangula had just finished mopping up the chocolate, and when she saw Prince SuperHunky standing there, she had to take a step back because he was exactly as his name described him. Nearly swooning, she steadied herself behind her marble kitchen island and tried to work with the melted chocolate that was warm, and in another bowl nearby, but she was all thumbs.  She knocked the entire thing over onto the cold marble. While that chocolate cooled, she also tripped over some skates that were on the floor, which meant that she also spilled nuts, dried fruit, gold sprinkles, and leftover candy into the block of cooling chocolate.

“No—not a mess at all.  Look—look how it just breaks apart into jagged pieces—like bark from a tree.”

Herangula and Prince SuperHunky tore off pieces of the chocolate and marveled at how wonderfully simple and delicious this treat was.  Soon, they rode off together on Prince SuperHunky’s Clydesdale. They made a beautiful home together and sold their recipe to the king and queen of Williams-Sonoma. The end.

All I can say is, thank goodness for Herangula and Prince SuperHunky because chocolate bark is just the thing to make when the television won’t work, and you feel like your head, legs, and feet have been repeatedly attacked by a swim meet mallet.

–Place the chips into a microwave safe bowl and heat them on high for 30 seconds at a time, stirring every 30 seconds.  Once the mixture is almost melted, but still bumpy, don’t heat the chips any longer. Just stir until smooth.  (Overheating scorches the chocolate).

–Spread the melted mixture onto waxed paper. You can spread the mixture so that it is thin and vaguely resembles a rectangle or big, free-form oval of sorts.

–Place the entire thing into the refrigerator to harden for a few minutes.

–Take the candy out of the refrigerator and break it into pieces of all shapes and sizes.  The pieces can be stored in plastic bags in the refrigerator or the freezer, for a harder, crispier bite.

Results:  Blankets of white chocolate cover the palette with silky, buttery vanilla while tangy and nutty blasts awaken the senses in a much more subtle way than confetti vomiting elves.  Enjoy!

Your Turn:  What is your favorite, quick treat to make in the kitchen?