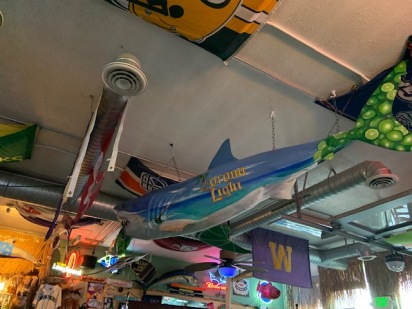 If shirt-shopping at the mall is your mate’s way of saying, “I’m turning 51. Please don’t do anything special,” blow those plans to bits and pieces with an action-packed itinerary that takes at least 6 ½ hours to complete—leaving your mate bleary-eyed and stumbling into the night. Sure, fifty may be nifty, but fifty-one’s a ton of fun. That’s the message you’re sending. With Alex as my trusty helper, we were able to give Nate—the supporting beam and load-bearing wall of the Fixin’ Leaks and Leeks Team—one heck of a wild ride. 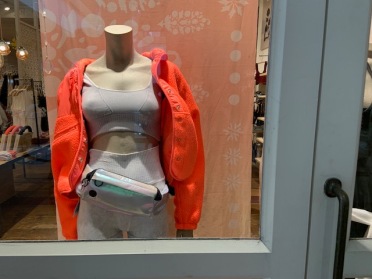 –This outfit. Is this what we’re wearing now? I don’t understand. I like the pop of color for the jacket, and I don’t mind the sports bra look, but the whole thing looks so drab—like white, long underwear that’s been washed too many times and then cut up because it’s too hot outside or something. And is that a fanny pack/foil blanket for emergencies? However, I can see how the look is inspired, given Global Warming and the pandemic and all—so clearly this is a statement: we’re hot, we’re tired, we’re sick, and we’re taking our frustrations out on our underwear.

–A book for children called Get Dressed, Sasquatch!

–Emergency mustaches! AND something called “Handerpants.”

–A dish towel with a slogan I can only hope to live up to: Do One Thing Every Day That Scares Your Family.

–Hunky “Drinking Buddies,” which I would not have seen, had Nate not pulled this item off the shelf and held it up to me. Great job, Nate! 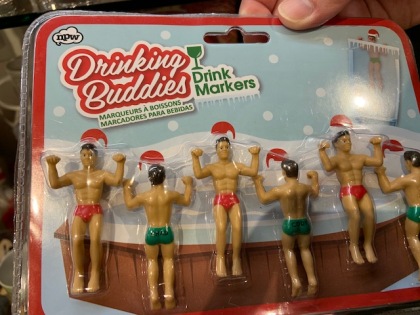 Time to put the mustaching and putt-putting away.

And Birthday 52 will soon be in view,

Coming to hit you with a fun-filled shoe.

24 thoughts on ““Shirt-Shopping,” but with Surprises: How to Plan an Action-Packed Day for Someone Who is Turning 51”