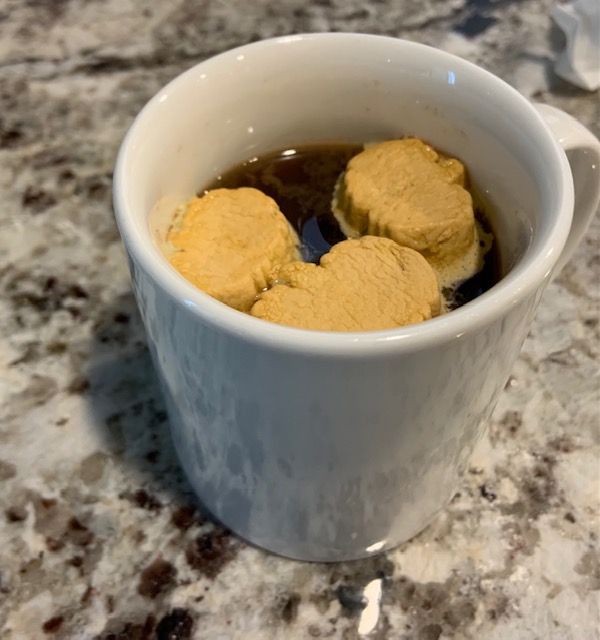 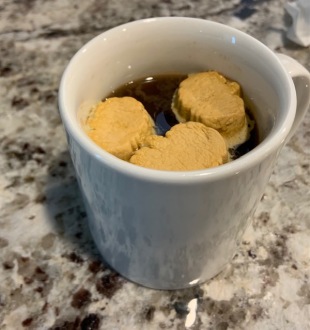 When the bottoms of pumpkin spice marshmallows billow out in spooky ways, sinking into the abyss of my hot apple cider, I know that it’s finally time to put dead-looking things in the yard and stuff candy corn in all of my pockets.

It’s also time for mad-scientist-style kitchen experiments while Nate’s settled in, watching a football game. Earlier in the day, when I rushed about the grocery store, I nearly knocked over a display of fall items, a squishy bag of marshmallows falling on my head. At first, I thought the marshmallows were leaf-shaped, but upon closer inspection, they were pumpkin-shaped, and I just knew I had to trap them in my cart and take them home to the Fixin’ Leaks and Leeks lair.

At home, I tore open the bag and sampled an unadorned, naked pumpkin treat. The pumpkin spice flavor was not very noticeable, but it was interesting enough to make me want to heat up a cup of apple cider and dunk several of the pumpkin shapes into the steaming hot liquid. And, I was happy with the results. The apple cider spice brought out the sweet pumpkin and cinnamon flavor, but here’s where I took the experiment too far:

I put the marshmallows into a cup of hot chocolate.

Pumpkin spice and chocolate, in this case, don’t go together. They make for a most unpleasant combination, so I thought I’d spare Nate from that experiment, but I did bring him a piping hot cup of the apple cider concoction while he was watching football. And, the look on his face—well, I’m not sure he liked it as much as I did, but now we know. Now, we will always know what pumpkin spiced marshmallows taste like—and what they look like, drowning in hot chocolate, “Monster Mash” gently playing in the background.

In Other News: I have a new story out called “Devil’s Urn,” published by Free Flash Fiction. I first learned about the Devil’s Urn from a fabulous blog post by Robert Parker, “Upstate & Away—Waterlooseneca.com” Do check out Robert’s blog posts—they are excellent. My story can be found here: Devil’s Urn.

I also have a Halloween essay out on the Horror Writers Association blog: “Halloween Haunts: Halloween Memories in the Basement.”

Your Turn: What have you been experimenting with in the kitchen lately?