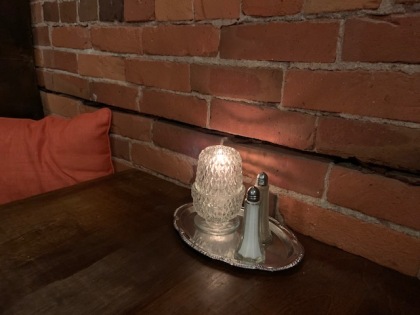 If ghosts and monsters want to jump out at me from under the stairs or a garbage disposal, I should at least not have to pay for such a thing. It’s my philosophy that getting scared during Halloween—or any other time of the year—should not cost a thing. Each year, long lines of cars tie up traffic in all directions near our house because of two pumpkin farms on either side of the only road in and out of town, and those pumpkin farms love to scare people by making them wait in the rain for hours before climbing aboard a hay wagon or traipsing through a dark maze booby-trapped with horrifying things and dead people—and it all costs nearly $5,000 by the time the night is through. That’s just ridiculous. Instead, enjoy a free scare, here, on the Fixin’ Leaks and Leeks blog. It’s year number five for the DIY Ghost Stories segment, and the Fixin’ Leaks and Leeks Team is in character, ready to serve up some treats. So, hang onto your Twizzlers and fun-sized chocolate, while members of the Fixin’ Leaks and Leeks Team visit a haunted restaurant in town, which is probably not all that haunted. It just has a spooky vibe, but mostly, excellent food and drink: The Repp in Snohomish, WA.

Nate: Dropping a kid off at college sure is tough, but he’ll be fine.

Cecilia: What if he gets tricked into a time-share? Or blows his face off in the science lab? Have we prepared him for everything he might encounter? Like secret black holes that lurk near the washer/dryer? Does he know about those? Oh, he’ll be swept away while he sorts his whites, Nate! Swept away!

Nate: He’ll be fine. I promise. Let’s celebrate—at the Repp—with a good drink. That’ll do us both wonders.

Cecilia: You’re right. We do have more time together now. Oooh! I think I’ll try a new cocktail.

(Nate pulls the car into a parking space in front of the turn-of-the-century building that houses The Repp. From the glass windows outside, chandeliers sparkle over dark wooden booths lined with red, crushed velvet cushions. Antiques and pictures grace the exposed brick walls.)

Nate: (Holding the door open for Cecilia) After you.

(The Yacht Rock station plays softly in the background. Pandora has been playing “Evil Woman” on a loop all of October, followed by “Brandy.”)

Cecilia: This place is just as charming as ever. Let’s sit at the bar.

Cecilia: And Rita Hayworth. So glamorous. I think I’ll get a dark and stormy.

Nate: And I’ll get a zombie.

Nate: Yes—just some drinks and appetizers to start with. We’re empty-nesters now!

Server: That’s something to celebrate, indeed. I’ll be right back.

(Shortly after the server leaves, loud banging noises come from the kitchen. The door swings open, and the owner of the restaurant runs out and climbs the stairs to the loft where there’s a stage for live music on Friday nights. He taps the microphone.)

Owner: Ladies and gentlemen, you might hear some strange noises coming from the kitchen. I assure you that everything is fine. No need to worry.

(The owner leaves the stage and seats guests as they come in.)

Cecilia: Well, that was weird.

Nate: Other than some pots and pans banging around, I don’t know what else he could be referring to.

Server: One dark and stormy and one zombie. Those appetizers will be out shortly.

Cecilia: Oh, that’s a lovely drink! I can taste the ginger. It’s so spicy. It’s a good, strong drink.

Nate: Yes—mine’s quite powerful too. They don’t skimp on the alcohol here. Food’s very good as well.

(Cecilia sips and gazes at the Marilyn Monroe photo.)

Cecilia: Do you think we should call Alex? Make sure he’s eating real food?

Cecilia: What if he lost his phone? How long would it take him to figure out he could email us?

Nate: A couple of days?

(Cecilia stares at the photo some more, dreaming about far-away Hollywood times, when a flash lights up the room.)

Cecilia: No—I think it came from the picture—the photo of Marilyn Monroe.

Nate: How or why would a camera go off from a picture?

Cecilia: Don’t know. Whoo! This drink is going straight to my head.

Nate: I know the feeling.

Cecilia: Wait! Did you see that? It looks like Marilyn Monroe’s eyes are glowing red.

Nate: You know—you’re right. That’s kind of strange. Should we pick another drink?

(Loud moaning can be heard from the kitchen. The owner resumes his spot at the microphone in the loft.)

Owner: Again—no need to be concerned about the moaning sounds. All is fine. I assure you.

Nate: Super strange, but I trust him. Seems like a trustworthy fellow.

Cecilia: Oh, yes! I mean, I’ve never had a bad meal here in my life.

Nate: And these appetizers are definitely up to standards.

(Another flash of light radiates from the picture of Marilyn Monroe. The entire room fills with smoke, and when it clears, Marilyn Monroe herself is stumbling about in heels, walking on wobbly legs that seem to be falling of their bones. She growls, reaching her hands out in front of her.)

Nate: Oh, no! I’ve heard of this before. It’s rare, but it can happen with antique photos, usually during a pandemic. They can come to life, but in zombie form.

Owner: Please pay no attention to the zombie. We have it all under control. These types of zombies dissolve with alcohol.

(A server runs by with a bottle of Jack Daniels and douses the zombie, which melts into the floor.)

(More flashes of light go off, along with smoke. More Hollywood celebrity zombies amble about. Even the antique lamps, shaped like elephants and clowns, come to life, frightening the dinner crowd.)

Nate: I’ve got an idea. (Motions to the bar tender). Do you have any spare alcohol you’re not using?

Bar Tender: Sure! Take this giant bottle of Jack Daniels.

Cecilia: Okay, I think I see where you’re going with this. I’ll distract the zombies, while you unleash the alcohol from the music loft.

(Cecilia dances wildly while Nate climbs to the loft, but he struggles to get the whisky bottle open. Sweat pours from his body.)

Nate: I can’t get the bottle open!

Cecilia: Take off your shirt!

(Nate rips his shirt off and expertly twists the cap off of the whisky bottle, flashes of light catching on his muscles and beads of sweat.)

Nate: There are just too many of them!

(Some of the zombies melt, but more are springing to life. Servers and diners are throwing drinks on the decrepit forms.)

Cecilia: That’s it. I’m calling Alex in for backup. We need him.

(Cecilia takes out her cell phone.)

Cecilia: I don’t have too much time to explain, but we’re being attacked by zombies at The Repp, and we’ll need your help.

Alex: I’d love to, Mom, but someone unlocked a closet on the roof-top access of the dorm—a closet marked “do not unlock,” and now we have zombie resident assistants riding around on University of Washington huskies mascots, which are also zombies.

Cecilia: Do you still have that root beer we bought you?

Alex: Yes, I know what to do: fill a fire extinguisher with it and blast it at the zombies. I’ll be fine.

Cecilia: Oh, we taught you so well! So proud of you, honey.

(Cecilia puts her cell phone away and looks up at Nate in the loft.)

The kid’s all right! Also, he reminded me of what we should be doing: Get a fire extinguisher!

Nate: Right! (Calling to the bar tender) We need a fire extinguisher!

Bar Tender: Of course. We always keep and industrial-strength one behind the bar.

(Cecilia runs the fire extinguisher up to Nate. They embrace passionately. Nate aims the nozzle at the zombies, which melt to the floor. Every last one. The owner of the restaurant mops them up and out of the building.)

Owner: Nothing to worry about—all is under control.

Cecilia: We did it!

Nate: Let’s get out of her before anymore zombies have a chance to climb out of the walls.

Cecilia: But we’re coming back next weekend, right? I mean, the dark and stormies are amazing.

(Nate gazes deeply into Cecilia’s eyes and carries her out into the night—both of them reeking of Jack Daniels, zombie body parts stuck in their hair.)

In Other News: I have two new stories out. The first one is in Yellow Mama, and it’s one of my favorite horror stories that I’ve written this year. If you get a chance, check it out. It’s called “Guarding the Koi Pond.”

Also, “Sign Seeker” is up in a cool new journal called Pigeon Review.

Your Turn: What are your fears?