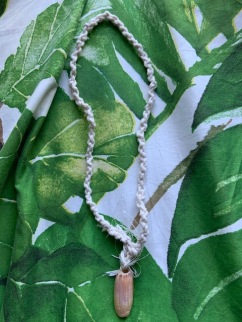 A shell-shocking screech, from inside our beach mementos collection, triggered the craft alert. According to highly scientific hypotheses that will never be proven with actual science (it’s literally just a hunch), ocean sounds trapped inside conch shells and such, can suddenly just “erupt.” The resulting sound is thus: “eeeeeooowwwwhooosh!”

I’m no shell whisperer, but I think that’s the sound of beach mementos that are tired of just sitting around. They want some action. They want to be incorporated into a craft.

Since the biggest bulk of our sea collection is somewhere in Alex’s room, the sound, logically, emanated from this source, so Alex had no choice but to create an absolutely fabulous craft that takes no time at all to make. He calls it a necklace, but for the purposes of this blog, I’m calling it a Knotty Nautical Necklace.

Alex walked me through the steps, and it’s beachy keen to make this totally awesome accessory. Here’s what you need:

–A pair of scissors

–Using the scissors, cut a long piece of string from the twine.

–Close the scissors blades and wrap the string around the thickest part of the blades. Secure it with a knot.

–Keep tying knots all the way up—leave just a bit of string at the end.

–Remove the knotted string from the scissors.

–Slip the bits of string at the end through the loop (where it was tied around the scissors) and secure with a knot but continue to leave a bit of extra string on the bottom.

–With the extra bit of string on the bottom, you can attach the shell. Alex selected a slim shell that had a hole/hollow center, so the string could be fed all the way through and tied off. You could also attach shells with a hot glue gun.

Once the necklace is finished, the noise in the house dies down a bit. It sounds more like a “whoowhoowhish,” but softer—more believable, like a real ocean.

It’s the perfect thing to wear with a pair of shorts and a brightly colored T-shirt, or you could go wild and wear it with loud, tropical prints that turn neon in the dark. All that matters is that you’ve made a beach memento happy. Shell, yeah!

Your Turn: Do you like to collect rocks or shells from the beach? What do you do with them later?