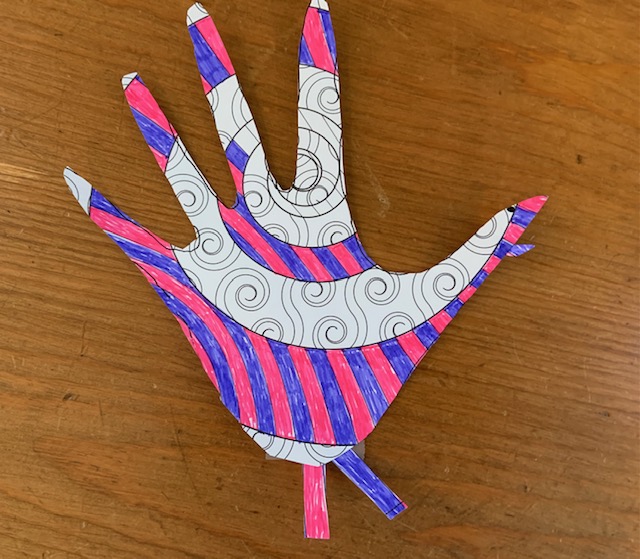 In a frenzy of fall-themed fever dreams, where pumpkins and napkin holders blurred together, slid under the door, and reconstituted themselves as Butterball turkeys, I thought: Why not introduce a color I really associate with Thanksgiving: Pepto-Bismol pink? Feathers flew, and that’s when I ended up with the Hand-Turkey-that-Doesn’t-Resemble Fall-but-Maybe-it-Does-After-All.

I was flipping through the coloring book I once bought myself—and had started to color— and I wondered: 1) Can I do something with this bright pink and purple coloring page? 2) Also, it’s not finished, does that matter?

The answers to both of those questions were 1) yes and 2) no! I simply chose a page I had dabbled in, traced my hand over it, and cut it out, which resulted in this Willy Wonka-type turkey that just might say, “Gobble, gobble, Gobstopper” before pulling a lever and sending unsuspecting dinner guests down a whirling tube into a raging river of grape soda.

In order for that to happen, the hand turkey would need feet and a wattle, of course, so I used snippets of the coloring pages, from which the turkey was born, to add functionality and bring the entire theme together.

I’m also encouraging Nate and Alex to join in on the fun, so that we have a parade of hand turkeys on Thanksgiving. I think they could work on the level of “runway lights” for an airplane, guiding everyone to the table. That’s my wish, at least, to keep the gravy boat from crashing into the gelatin salad. Hopefully, they’ll come in handy.

Your Turn: Do you ever recycle art or crafts projects to make a new one?