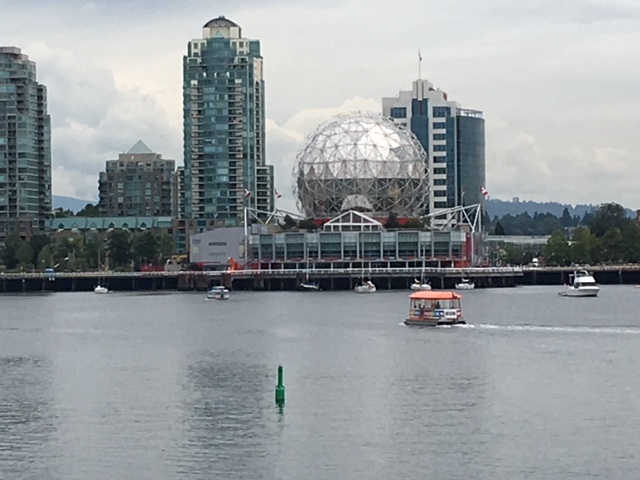 For skort-shredding, grit-in-the-teeth, foot-blistering fun, tour Vancouver, Canada like your child is away visiting relatives and you and your spouse might not get a vacation alone again in a very long time.  That’s just what Nate and I did this past weekend.  We toured. We toured hard.  We lit up the streets with the friction between our thighs—we were walking that fast.  And we rocked it.  We rocked it hard.  Here’s how you can rock it in Vancouver too:

It’s not haunted at all.  I made up a ghost story that took place in this hotel a year or two ago during my Halloween “blog blitz.” I was trying to do a ghost tour on the cheap by DIYing it. The blog post was called: “Haunted DIY Ghost Stories of Vancouver, Canada” and the results are just what you would expect from the Fixin’ Leaks and Leeks team:  unusual, bizarre snippets of absurdity provided in the hopes of a laugh or two.  I just want to take the opportunity now to tell you all for real—in case there was any doubt or confusion due to previous blog posts—that in this hotel, you will not wake up in the morning all possessed and stuff.  In fact, this last time, when I did fall asleep for a moment or two, I had a beautiful dream about receiving two separate emails about two short stories I’d sent to literary magazine editors in the hopes of publishing them.  In my dream, both emails indicated that two different magazines would accept the stories in question.  This dream was so fantastic and real, that when I woke up in the morning, I used my phone to immediately check my emails.  However, I did not get any acceptances from literary magazine editors. Instead, I got a rejection for a story that I’m having a hard time placing.  It’s called “The Change” and it’s about an ax-wielding menopausal Sasquatch named Chloe, who finds her purpose in life.  I’m hoping to get it published because I think it can help a lot of people.  It’s kind of a Dear God, it’s me, Margaret . . . but for menopausal Sasquatches.  Maybe it’ll end up in the self-help aisle of a bookstore someday. Who knows?  In any case, I don’t blame the hotel for my story rejection.  The mattress on the bed is very soft and the rooms are tastefully and luxuriously appointed. I always feel like a queen, but not one that’s trapped in a Sasquatch’s body—unlike some other hotels I may have stayed in while on vacation, but that story can wait for now.

Me: I don’t know. This place has a 3.8 rating.  Do you really think we should eat here?

So, we bellied up to the bar. I had a rosé and Nate had a Moscow mule and some yucca fries that came with a delightful sauce.  We were just beginning to relax and unwind, when we received alarming texts from Alex, who was supposed to be in Chicago boarding a plane to Dayton, Ohio to visit relatives. However, his flight kept getting delayed and delayed and delayed. We weren’t sure if he would ever leave Chicago.  I was in complete freak out mode. Though Alex is 16, this is my first time as a “free range parent.”   That’s when the manager on duty sprang into action. He served me more wine and helped Nate and me move to a table where we could set up a “nerve center.”   From this strategic site, I texted hundreds of heart and poop emojis to Alex. Then, I texted even more heart and poop emojis to my parents and brother and sister, asking for a prayer chain to invoke St. Christopher and whoever the saints of wine, headaches, and nervous stomachs might be.  Nate, on the other hand, was more sophisticated with his texts. He sent Alex gifs of monkeys crashing planes and dancing.  Then, the food came to the table and it was delicious: fresh, fluffy naan straight from the clay ovens. I ordered a tikka shrimp dish that was so spicy and flavorful—and cooked perfectly.  Nate’s butter chicken sauce was really, really good too because I tried it by dipping a piece of naan into the sauce.  The food was a delightful distraction, but we were still worried.  The manager came by to check on us and reminded us about our options for Alex at the airport—other than texting nonsense.  We could call the airport and request that an agent check on Alex to make sure he was okay.  Then, he told us about his flying experiences. One delay of his was so bad that he missed his connecting plane, which would have put him on the doomed Malaysian Airlines 370 flight.  So, now we were glad that Alex was safe on the ground at this point.  However, after my third glass of wine, Alex was finally on a plane and he landed in Dayton an hour later. Long live the tikka shrimp, rosé, and night manager on duty 6/28/19 at this restaurant!

We also ate at the Season’s restaurant, which overlooks the gardens that continued to captivate me. Here’s a snippet of the conversation I shared with Nate:

Me:  My beer tastes amazing.

Me: How much would it cost to have gardens like this at home?

Me:  Hmm.  What would that be in Canadian dollars?

Nate: Not much less.

Nate: Not really. No.

Police Officer:  Well, helloooo there! How are you?

Police Officer:  Do you know what you need?

The man sat for a while, and then he charged through the front doors of the food court. That’s when I grabbed Nate and headed for the back door. I have no idea how this story ends, but I hope the breakfast sandwich hit the spot.

Me:  Nate, you did tell the border guard that we’re not carrying any fruit or agricultural products with us? That’s what they’re really looking for.

Nate: Of course I told them we weren’t carrying any fruit or agricultural products! I have no idea why they’re doing this. This sucks!

So, we pulled our car around, and we were told to go inside the building next door and wait.  While we waited, I watched border patrol/customs agents walk around behind a desk and go to cubicles to work.  There was one very entertaining group of border officials that walked around with precisely two oranges and a banana.  It took about three of them to carry these pieces of fruit efficiently: One to hold the fruit and two to parade around behind the agent holding the fruit.  They looked pretty proud of themselves—like they had found the two oranges and a banana in a car and confiscated them. They looked like they were rehearsing what they’d say to the culprits when they presented the oranges and banana to them: “We told you. We told you to tell the truth about agricultural products and declare them. Do you recognize these?  We found them in your lunch sacks!”

We were probably “detained” for 20 minutes and that same group of border patrol agents paraded around the back with the fruit at least three times. At one point, I convinced myself that they would juggle the fruit. In fact, I was really hoping they would. I kept saying, “Please juggle!” in my head until we were called to the counter and told that we could leave. All in all, we could have probably avoided the whole “random car inspection” fiasco if I could have just applied what I learned from the Canadian police just a few hours before. I would have looked at the border agent, smiled cheerfully and said, “Do you know what you need? That’s right! A breakfast sandwich!”

In Other News:  I did get a story published here recently. It’s called “The Fireworks Wars” and it’s in Sirens Call Horror Magazine, p. 102. Cheers!

Your Turn:  What are your favorite weekend get-aways/tips?

25 thoughts on “A Weekend Romp through Vancouver, Canada—Fixin’ Leaks and Leeks Style”